There are many reasons why I shouldn’t like While You Were Sleeping. The entire plot is based on the thinnest of misunderstandings, even by rom com standards. Peter is the victim of a creepy, prolonged mind game by Saul and Lucy. No way anyone would believe that someone engaged to fancypants Peter wouldn’t have a giant rock on her ring finger, which should have stopped the plot dead in its tracks right there. Anyone who has lived in Chicago for even a month would know northside Peter supports the Cubs and not the White Sox. And yet, it’s one of my favorite movies. 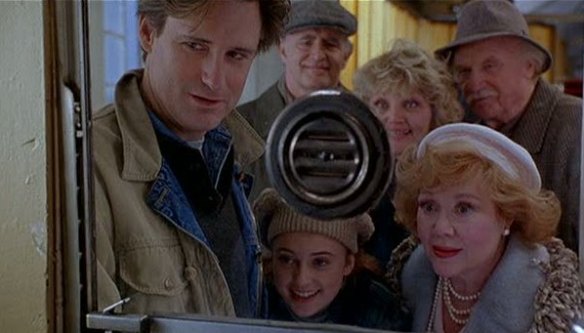 Is this sight scary or heartwarming? Depends on your tolerance for meandering discussions of Guy Lombardo and Argentinian beef.

The chemistry between Lucy and Jack sparks right away, and any scene with the whole family is gold. Obviously, the movie pushes the idea that half the reason Lucy’s in love with Jack is because she finally has a family she can join. When I was younger, I never believed that Lucy would be as friendless and alone as she’s shown to be, but the more time I’ve spent trying to fit in to new cities, the more I appreciate just how difficult it is to get set up with new friends. And I have the Internet, with its Couchsurfing and Meetup and things, which is more than Lucy had, back in 1995. Lucy makes friends at work, but when your job is sharing a small booth with one other person collecting subway tokens, you don’t meet a lot of people. Besides which, she’s grieving her father, who died just the year before. It’s actually not surprising that she’s so isolated.

Meeting the Callaghans, who are marvelously open and friendly (perhaps a bit too much so, to a strange woman who claims to be engaged to their comatose son), would feel like coming home. And then you get to sit through dinners talked at such cross-purposes that in my family, when things are getting similarly ridiculous and rowdy, someone just yells out, “I never said he was tall!”

Of course it’s a Cinderella tale, and we can’t forget that Lucy would never afford that trip to Florence on her own, while the upper-middle-class Callaghans can shell out for it no problem. But I’m willing to go along with the idea that the real treasure Lucy gains is the love of a family, and their wealth is a nice bonus.

And Elsie has the best answer to “would you like some more wine?” ever. She says, “Oh I don’t drink anymore.” Beat. “I don’t drink any less, either.” For a grandmother like that, you might fake an engagement to a man in a coma, too.

1 thought on “Film Club: While You Were Sleeping”