The port town of Guayaquil is the largest city in Ecuador, and it’s one of the oldest cities as well. It’s been the site of many a battle through the years, including skirmishes with pirates and fights for independence from Spain. This contributes to the rough and ready reputation the city and its citizens have, and most people I met there were half-proud, half-sheepish about that reputation. Sure, it doesn’t have the polish of Cuenca or the political importance of Quito, but people from Guayaquil wouldn’t want to be from anywhere else. 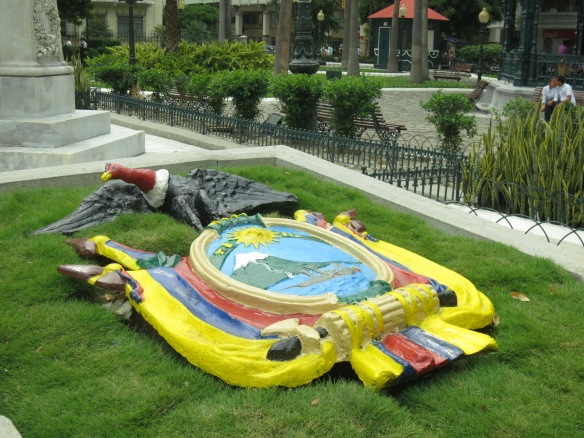 El malecon is a revamped stretch of waterfront, a long, rather sterile boardwalk containing statues of past leaders, a botanic garden, a children’s play area, a couple restaurants, and a large clock tower. I liked the part of the walkway built to resemble sails of a ship, and the odd sculptures representing the four elements. The climate of Guayaquil is perfect for the botanic gardens, which sagged with the weight of giant green leaves and bright flowers in the humid heat. 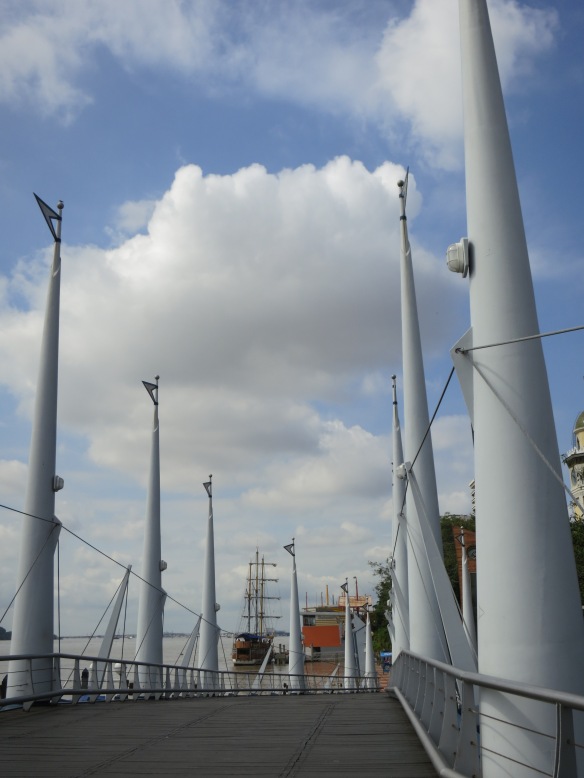 Masts along the walkway 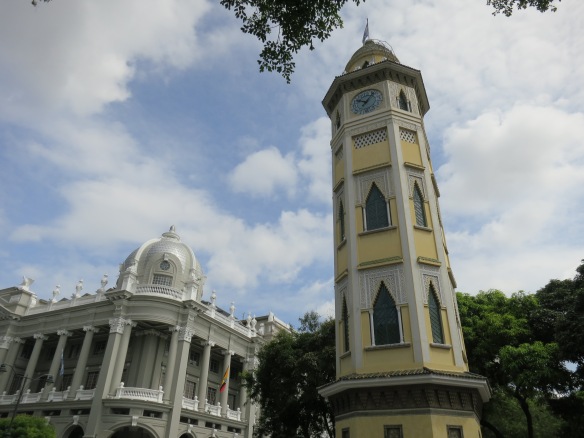 Clock tower, and across the road, an attractive government building 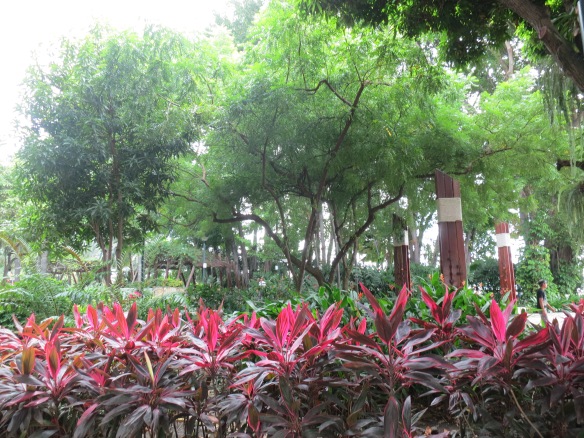 Over a hundred years ago, some iguanas made the plaza in front of the cathedral their home, and since then, it’s unofficially been known as the iguana plaza. There are signs everywhere asking people not to touch the animals, which were roundly ignored by most visitors to the plaza. I did have to watch my step in there–most of the iguanas lounge on the fenced-off areas, but a few decide to leisurely move to another grassy knoll, usually stopping in the middle of the pathway for reasons known only to them. I’m used to seeing pigeons or squirrels take over a public area, but this was the first time I’d seen reptiles be the local pest. 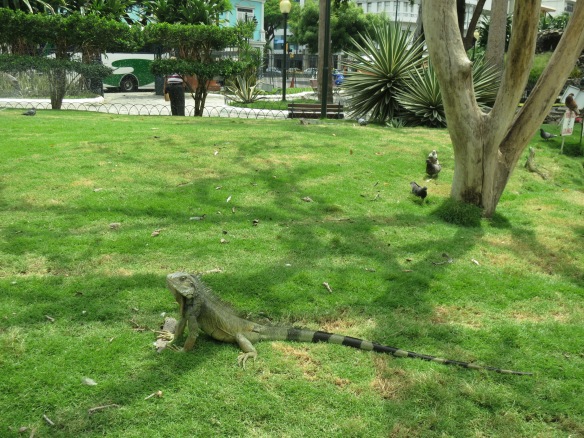 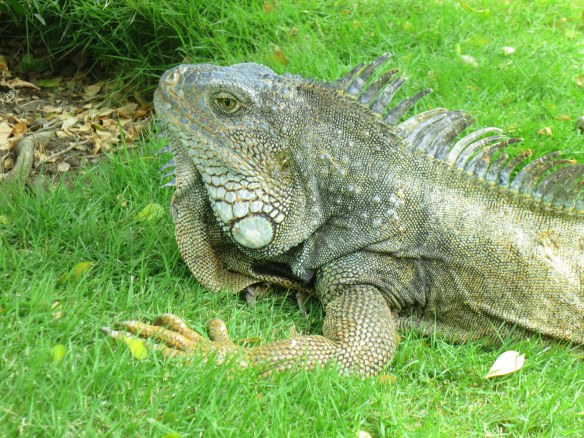 My friend Andy, a native of the city, took me to the Parque Historical, which is a combination outdoor museum and zoo. The zoo area was closed when we visited (the animals are given a day of rest every week, which I think is great), but we were able to see the outside of the hacienda and the reconstructed villagers’ house on stilts. Behind the stilt house, we watched pigs rooting around in their feed and ducks splashing in water. Andy showed me the cocoa beans, which have to be dried in the sun before they’re ground up and used for chocolate. He identified a lot of plants for me, which I always find impressive, as I can maybe name five plants native to my home. 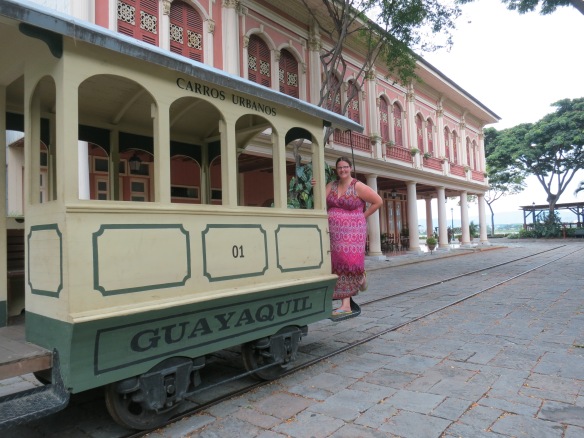 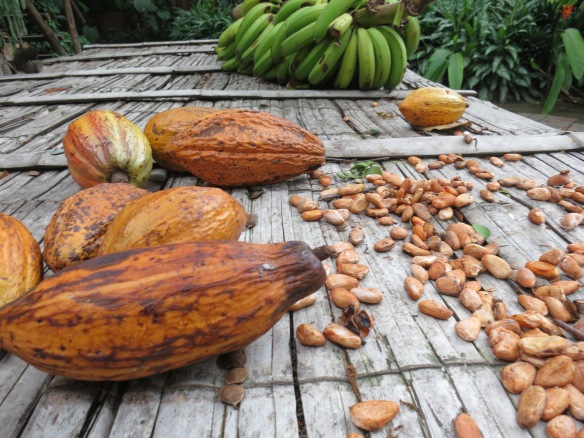 Finally, I spent a little time in Las Peñas. This is the oldest part of the city, a collection of colorful buildings on a hilltop at the end of el malecon. As is true in formerly rough waterfront areas in just about every city I’ve been to, the city leaders have put a lot of money into cleaning it up and bringing tourists in. I didn’t get to experience the nightlife there, but it’s meant to be really fun. As it was, I bought some souvenirs at the large artisan’s market and walked down the oldest street in town (cobblestoned, of course). 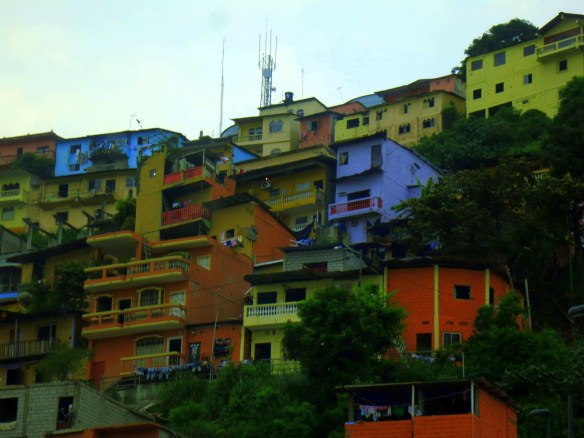 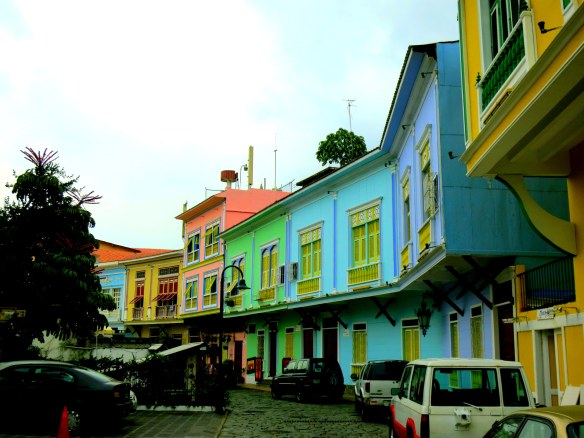 A lot of people, myself included, use Guayaquil as just a stopover on their way to other places, but from what I’ve seen, it’s worth spending more time there and exploring the place that claims so many proud residents–not to mention noble iguanas. 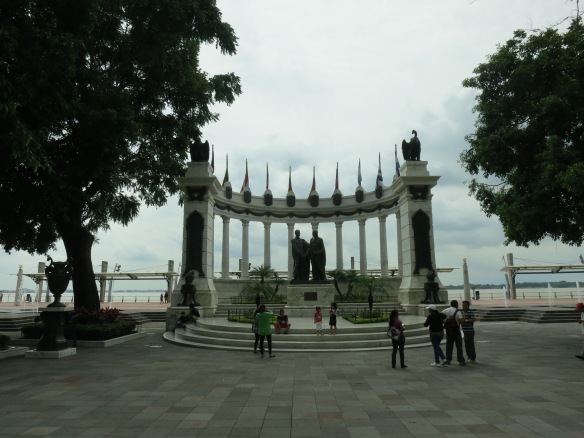