My friend Liz and I didn’t have much time in Cardiff, so we knew we could only do a couple things. I wanted to see the castle and the Doctor Who exhibit. We saw the castle, but we had laughably bad luck with the exhibit. At least we saw a lot of Cardiff on our way to the Tardis that wouldn’t let us in.

Another ace landing by The Doctor

We walked from downtown, with its pedestrian-only streets, covered arcades, and huge department stores, along the main road to the harbor. The waterfront underwent a transformation in the last 15 years, following the same pattern as so many formerly working-class neighborhoods, going from underfunded zone to respectable tourist destination with the backing of a lot of government and private money. I didn’t find it to be all that interesting a space, except for a few structures: the Millennium Centre, the towers of Roald Dahl Plass (which I know from Torchwood), and the small Norwegian church that Dahl attended as a child. 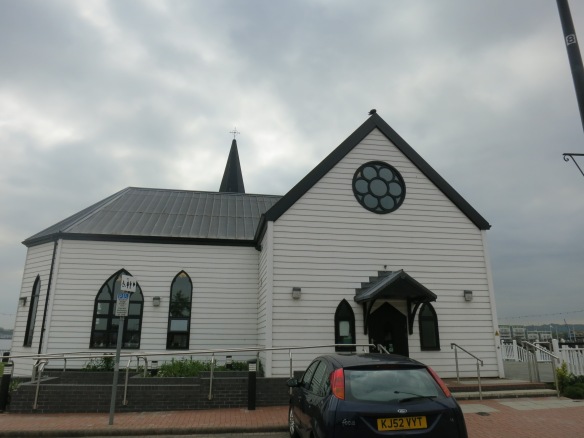 The Millennium Centre houses the Welsh Opera, and the words on the front reflect this; the English words are “In these stones horizons sing,” and the Welsh words, “Creu Gwir fel gwydr o ffwrnais awen,” translate to “Creating truth like glass from the furnace of inspiration.” Roald Dahl Plass itself wasn’t terrible interesting–it’s a large, empty oval, with nothing of the imagination of the man it’s named for, which is disappointing. But there are enough things around there–the Welsh government building, a carousel, the shops of Mermaid Quay–to keep you occupied. 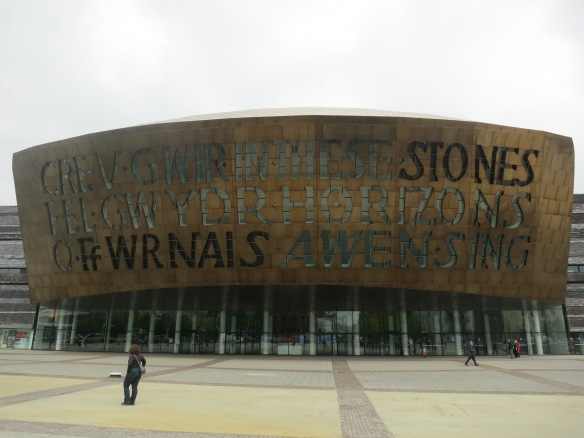 I think both phrases are lovely, especially for an opera house

We actually hadn’t intended to go all the way to the waterfront. Our guidebook said the Doctor Who exhibit was in a shopping center a little bit inland, but when we went in there, we found nothing but shops and a few between-meals restaurants. We wandered around for awhile, almost as if we’d hear that wheezing brakes sound and the Tardis would reveal itself to us. Since this was reality and not a BBC program, this did not happen, and we asked some waiters on a cigarette break where it was. They explained that the exhibit hadn’t been in this location in years, and we’d have to walk along the waterfront to just about as far as it goes. So we found all these sights along the way, and then finally we saw the big “Doctor Who Experience” sign looming in the distance, hurrah!

One of the churches in the town center

Oh but it wasn’t going to happen, as it turned out. I was not going to battle a Dalek and zip across space and time with a wacky Time Lord. We arrived at a little after 4pm, to find that only the gift shop was open. Apparently tours are only 10am til 3pm, and you have to reserve them ahead of time. Okay, can we reserve for tomorrow morning, before we leave town? No, tomorrow is Tuesday, the only day the exhibit is closed. I mean, if ever there were signs that something was not meant to be, these were those signs.

By that point, we’d walked miles and I was more than ready to take the bus back to the hostel. We waited for 20 minutes, optimistically believing the screen giving us updates on when the next bus would arrive–5 minutes, 2 minutes, arriving–until it became clear it was a system of lies. It was almost as bad as waiting for a Chicago bus. Though maybe not as cold.

The Water Tower, ready to take you down to Torchwood HQ

Back at the hostel, we consoled ourselves on our ill-fated journey with a local Brains beer, and we marveled at the fact that we hadn’t even thought to check the internet to confirm what our guidebook (only a few years old) was saying. We concluded that actually it hadn’t been so bad. We hadn’t spent any money (tickets are £15, or about $25), and we’d seen a lot of Cardiff along the way. A budget traveler’s happy mistake!

Our view along the river for our last drink in Cardiff