I was already inclined to like Cardiff Castle when Liz and I walked across the large courtyard; the guy handing out the audio guides was incredibly cute and taught us how to say “thank you” in Welsh (a phrase which has nearly double the amount of vowels found in most Welsh words). But then we found falcons, and centuries-old graffiti, and a group of schoolchildren dressed in paper crowns, and we really liked it.

What’s left of the keep of Cardiff Castle in Wales

The castle was built by Norman invaders, on the site of an old Roman fort. So it was never a site owned by the native Celts. Cardiff Castle was part of the Marcher territory, a strip of land that acted as sort of a buffer between England and Wales from the 12th to the early 16th centuries. Marcher lords had almost total autonomy, though they were tasked by the English king with keeping the border secure for England, and they used a lot of Welsh laws in administering justice. A fascinating in-between kind of place, the kind of place where each motte-and-bailey castle matters immensely. 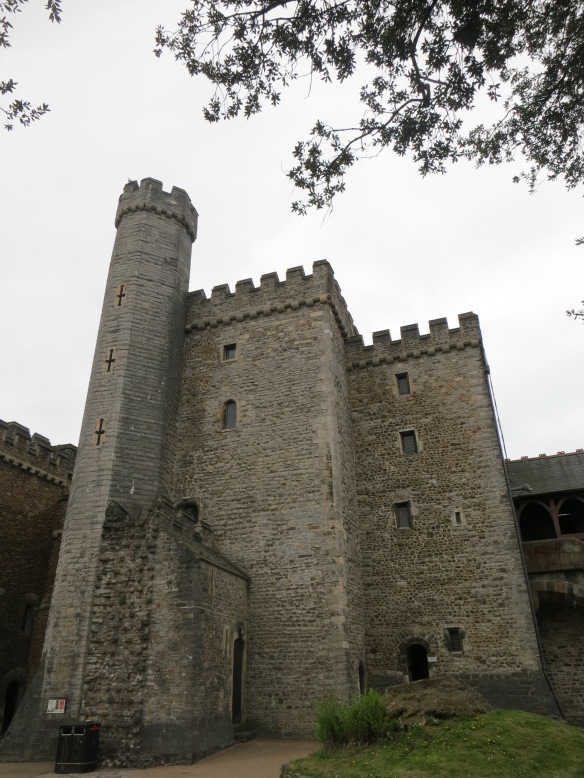 The first thing you see when you enter the castle walls

Bell tower on the left and main range on the right

Once England firmly and finally took hold of Wales, the Marcher lords lost their far-reaching powers, and the castles lost their importance as defensive bastions. In the 18th and 19th centuries, the Marquesses of Bute changed the castle grounds to be more of a residence and less of a fortress. They employed the marvelously named Capability Brown to make the changes, which mostly involved knocking a lot of stuff down and updating the main range (main house) to be fashionable for 1776.

The Arab Room in the main range was easily my favorite (the name, I know). The geometric shapes and deep colors were mesmerizing. It even had a crystal in the stained-glass window, the better to refract light even more. The dining hall was impressive, as was the long library and its massive fireplace. Apparently one of the family was fond of monkeys, and they can be found as little flourishes throughout the house; one is the bell-pull next to a fireplace in a corner room. 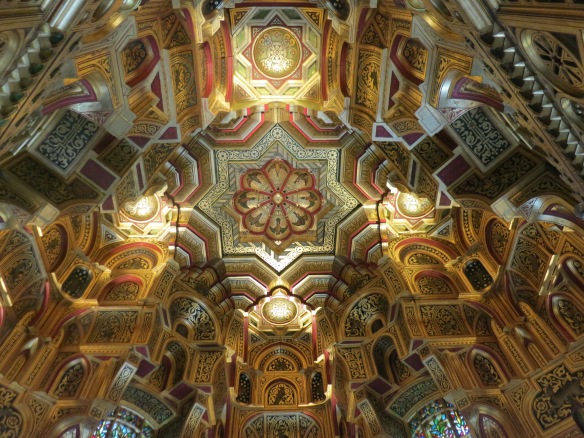 The ceiling of the Arab Room

In a little hut next to the main house, falcons and an owl fluttered and swiveled on their perches. Outside the hut, peacocks stalked the grass, secure in the knowledge that they owned this place. A group of about 30 schoolchildren dressed in paper crowns and too-long tunics giggled on the green, and some of them got close to the peacocks before shrieking and running away again. From fortress to children’s playground in just under 1000 years.

Hedwig of Harry Potter, is that you? 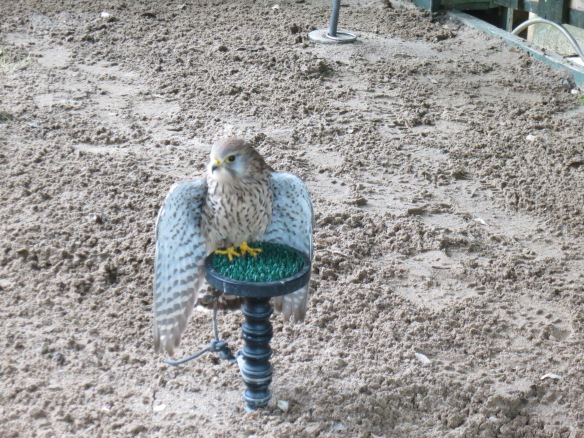 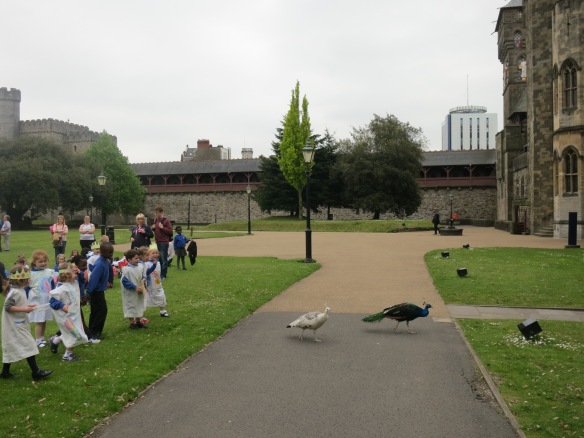