Look up, because you might see something wonderful. If I were to make one of those dreadful inspirational posters, that’d be the caption and the photo would feature one of the ceilings of the National Palace of Sintra. Because “look up” might be bland life advice, but it’s just plain practical when it comes to this palace.

National Palace of Sintra, in Portugal

Sintra, a hilly region slightly northwest of Lisbon, has been used by rulers for centuries as a place to establish power and build pleasure palaces. There’s nothing left of the Al-Andalus building that was once here (luckily the so-called Moorish Castle up the hill is another UNESCO site you can visit). What remains today is a mostly medieval and Renaissance construction, with decorations and furniture ranging from the 15th to the 19th centuries. 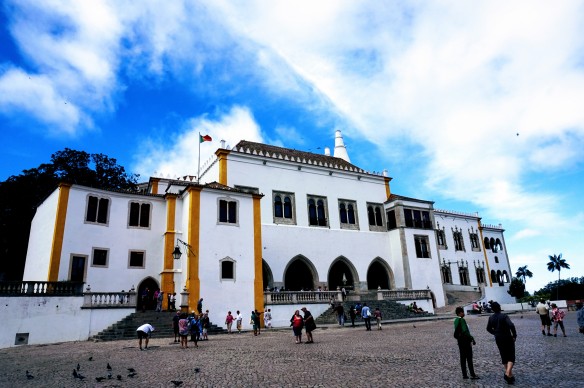 There’s a lot of mention in the castle of the Manueline style, which looks vaguely like it’s from the Tudor period (because I live in the UK and most of my sense of this type of architecture comes from here, Tudor is my reference point), and indeed the style is named after King Manuel I, who reigned 1495-1521, overlapping with Tudors Henry VII and Henry VIII of England.

View of the Moorish Castle from the National Palace of Sintra 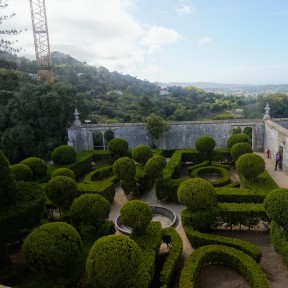 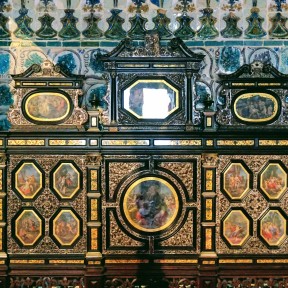 I love when you can see different fields directly influencing one another in specific historical times and places — as in, this type of literature is directly related to the political turmoil of a time, or in this case, this type of architecture is directly related to the major expeditions of exploration Portugal was making at the time. Taking elements of the Gothic style, architects in the Manueline style added influences from places Portuguese ships had ventured to — especially India (which included Islamic elements, and of course the previous rulers of Sintra were Arab Muslims, the Moors, and so it’s all intertwined). The Manueline style also incorporated elements that referenced the Age of Discovery directly, including ships, anchors, items from the sea, and botanical flourishes. (This is especially apparent in the monastery in Lisbon — stay tuned for a post on that!) 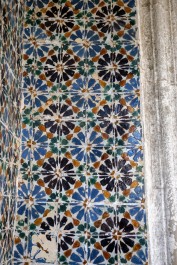 I saw (nearly?) this exact pattern in Morocco — influences popping up everywhere 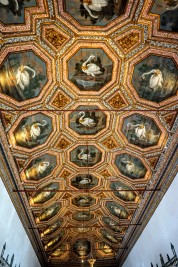 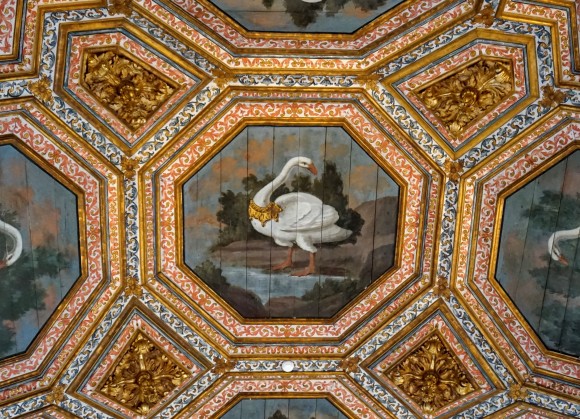 Legend has it that King João I decorated the Magpie Room as a public rebuke: his wife caught him cheating, and he had as many magpies as there were women at court painted on the ceiling of this room, not because he felt guilty but because he wanted to chastise the women who gossiped about the affair. 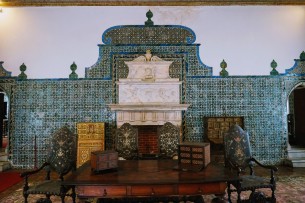 The Arab Room, as it’s apparently called — yes that fountain used to work and yes this was at one point used as a bedroom. Bedroom goals.

The translation for this pattern is ‘cock’s feet’

Most of the rooms in the palace are by now known according to what graces their ceilings: the Swan Room, the Mermaid Room, etc. One room, however, has the most boring name but the most magnificent ceiling: the Coats-of-Arms room. Manuel decorated this ceiling with the coats-of-arms of the most prominent 72 Portuguese families at the time — although a couple hundred years later, one of those was removed, because members of the Távora family were convicted of plotting against the king. Oops. 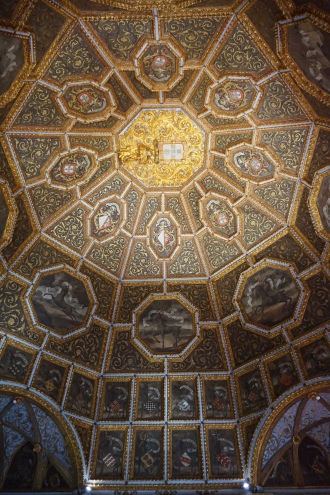 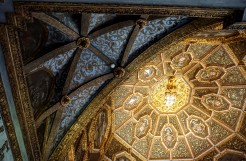 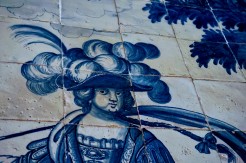 The National Palace of Sintra was in use by the Portuguese monarchy up until the founding of the Republic of Portugal in 1910, at which time it became a national monument. A few decades later it was restored, and in 1995 it was listed as a World Heritage site by UNESCO as part of the Cultural Landscape of Sintra. It’s open to visitors who want to catch a glimpse of royal splendor — even if it means getting a neckache from looking up.

1 thought on “The National Palace of Sintra in Portugal”