When my friend visited this past weekend, her only request for sightseeing was “one of the Magnificent Seven,” and she wasn’t talking about movies. She was referring to the 19th-century cemeteries set up in what were then the suburbs of London, and have since become part of the metropolis itself. People had been overfilling cemeteries in London proper, which meant decaying corpses oozed into the water supply, spreading disease. So new cemeteries with plenty of room were built away from the city center, in less of a cramped and more of a more park-like arrangement, apparently modeled after Père Lachaise in Paris.

We went to Nunhead Cemetery on a gloomy winter day, which is the correct time to go, of course. A few other people wandered through the gates carrying cameras, like us, but they took a different route from us and somehow we never ran into them. Every ten minutes or we encountered men walking their dogs; the dog would give us a sniff and a friendly wag of the tail, and the man would give a slight nod of acknowledgement, and they’d move on. So we mostly had the place to ourselves, which only added to the slightly spooky atmosphere.

Art installation in the Anglican Chapel 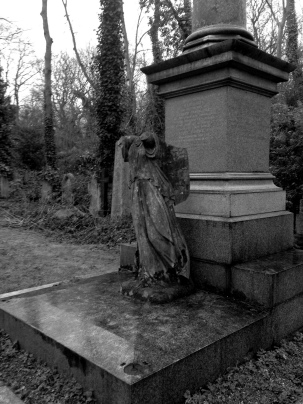 Is this someone growing hops?

Most of the graves were from the 19th century, and apparently left untended for at least the last several decades; gravestones tripped precariously to one side, beheaded angels stood guard over larger graves, stone inscriptions were eroding away or covered in bright green moss. The paths were well-maintained but anything just off of them was left in a perfect state of romantic decay. A Gothic sense of melancholy draped over the stones along with the creeping ivy. 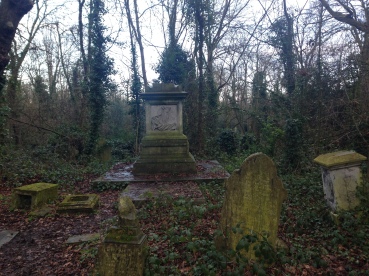 At one point, we were admiring a crow as he hopped about, and then he picked up what seemed to be a chicken bone, and just when the scene couldn’t get more macabre, he fluttered into the air and alighted on a headstone. If you’re looking for a mournful Victorian graveyard to wander about in, I can highly recommend Nunhead Cemetery.

Beautiful Britain is the title I settled on for posts about the British adventures I’m having while living in London. It covers London and non-London locations alike.