Bright green grass, bright white outfits. Ivy-covered walls. Crowds getting slightly noisy until the ump issues a gentle “Quiet, please.” A fault, an ace, a thrilling return, the cheer of the crowd. For as long as I can remember, my family has watched at least some of the TV coverage of the Wimbledon championships held over two weeks in late June and early July. This year, I was determined to see it live. I promised my family I’d go for all of us–and it was such fun, and so full of good tennis, that I think I did them proud.

Can hardly believe I made it 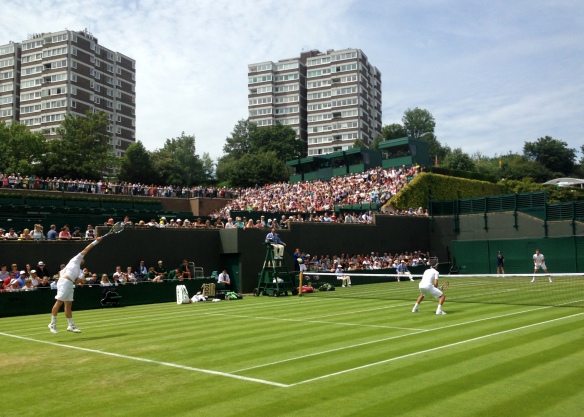 First view of the courts

The start of the queue

You can get tickets to Wimbledon one of only a few ways: getting debenture tickets (I guess this is being part of a company that gives a lot of money to the All England Lawn Tennis Club); being part of certain tennis clubs; putting your name in a ballot for a set number of show court tickets; and queuing. The AELTC emphasizes that they consider this the most fair way to distribute tickets, because there is always much more demand than supply, so they make it a lottery and then a first-come-first-served situation. (Aside from the debentures, tennis clubs, and other rich people ways of getting tickets.) 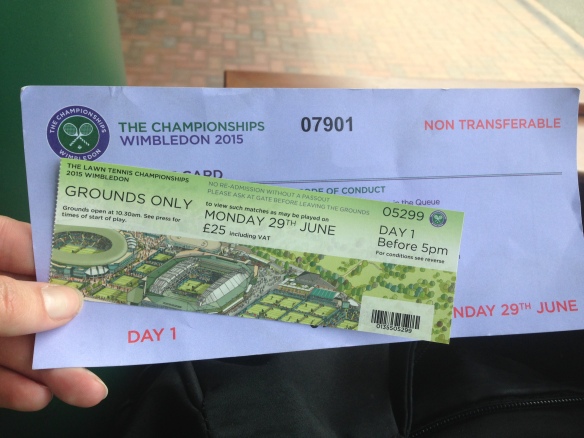 Liz has been to Wimbledon five times, so she was my guide. On the first morning of the championships, we woke up far earlier than either of us would ever choose to on our own, got two tubes, and walked with the crowd up the high street of Wimbledon (the area of London) to Wimbledon (the park). We joined the queue, which followed the border of the park for a while, skirting around the cars being parked in one area, and looking enviously just over the fencing at the people moving toward the front of the queue already. We walked past a TV show setting up for filming, two newspaper stands offering a paper “with full order of play!” and a goody bag, at least three film crews, and a greyhound charity. By the time we reached the food stand and toilet areas, my senses were already overwhelmed.

We were given a queue card, along with strict instructions to hold on to that queue card for dear life, as it would grant us entrance to the front of the queue, which might grant us access to the ticket booth–depending on how many people they could fit in the grounds. I heard one man ask a steward if he could guarantee he would get in, and the steward replied, “Well, I can’t promise anything, I can’t give an exact time. Because then I could be wrong, and then it could get emotional. And we don’t like that.” Which is possibly the most English thing I’ve ever heard. We got tickets 7900 and 7901, and the steward mentioned that usually the first 8000 cards got in. Lucky that we weren’t any later, then! This was 7:36 am.

We settled down at about 7:45am and this was the queue that was already there

How do you cosplay at a sporting event? Dress in your tennis whites, with that John McEnroe headband action going on

It was a hot and sunny day, so we slathered on sunscreen in the fierce morning light, after which we ate breakfast from the food we’d cleverly brought. I immediately lay down and dozed, waking only to stand up and shuffle along with the crowd to a different spot in the field, part of a complicated organizational scheme to keep the queue orderly and moving along. We moved to our new spot and sat down again, behind the middle-aged English ladies doing the crossword and in front of the Greek man who had been coming to Wimbledon for years and was telling his son all about it. To our left were the tents; that’s right, you can camp out to be sure you’re ahead of most people. People had camped out over the weekend to get first day tickets, and the people who we saw in tents now were camping out all day Monday to get Tuesday tickets to see Andy Murray. Fair enough–if you’re early enough in the queue, you can buy show court tickets, whereas I knew I wasn’t getting anything but grounds tickets. I admired their commitment and felt for them, tied to their tents except for bathroom breaks and food runs in this intense heat.

After we were moved to the other side of the giant field, ready to advance in the queue after another couple hours (note the tents on the left)

At about noon, our part of the queue got up one last time and walked to the front part of the queue–still a park’s length away from the actual grounds of the tennis club. If Liz hadn’t been there, I would have despaired I’d ever get in, or ever understand what was going on. We walked along a heavily HSBC branded section, drank some free squash, went through the security checks, and finally, finally crossed the overpass over the main road to get to the ticket booth. We got in at just after 1 pm. 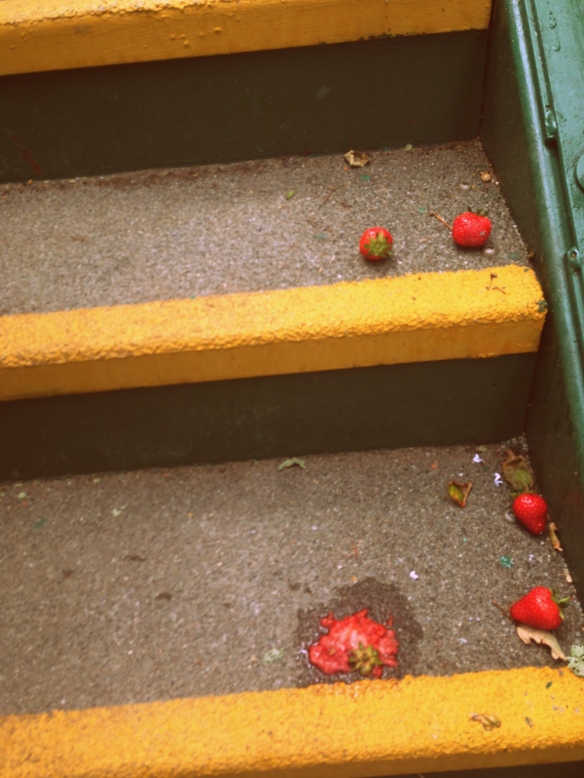 But I mean, that’s all part of the experience. My feeling once I was in the grounds was the same; I was here to be with a bunch of people who liked tennis and liked the quirks and traditions of this particular tournament. I wasn’t here to see a particular match or make a fashion statement or spot royalty or anything (good thing, since I did none of those things). Sitting in the queue, I read a book, napped, watched a bee try to turn the pages of a book, chatted with Liz, ate a picnic lunch–basically had a nice morning in the park. Once in the grounds, I was ready to see whatever was available.

After inspecting the big board that displayed the order of play, Liz suggested we find Court 19, where we could see the latter part of a men’s doubles match. I love doubles; there’s much more going on than in singles, and my favorite shots at net are much more common. We watched from one side for a bit, then ran around to the other side of the court and scooted into front-row seats during one of the short breaks in play. Front-row seats for a match at Wimbledon! Who cares it’s not a show court, I was at risk of being beaned by a tennis ball going over 100 miles per hour–that’s the important thing.

Doubles is the best

We watched Sam Groth nearly give himself apoplexy whenever he or his partner Sergiy Stakhovsky missed a shot, and eventually they lost to third-seeded Vasek Popisil and Jack Sock (who looks eerily like Doug Dorsey of The Cutting Edge, which got me to idly wondering if he and Popisil were in their own reimagining of Taming of the Shrew).

This was the only job I saw this man perform. Hold an umbrella for shade. Liz says he also did grounds thing, but I’m pretty sure he’s just an umbrella holder.

The way the courts are set up on this side of Centre Court, you have a little privacy from one court to the next, but not much. On the other side, there’s none at all, and if you’re not careful, a badly hit ball could go into another match just across the aisle. I marveled at how this place I’m used to thinking of as rarefied and grand is actually, of course, a functioning tennis club most of the time, where people simply play games and work on their serve. I’m used to seeing the show courts on TV, but that’s only a very few; there are many more out there that you can literally wander past on your way to get an ice cream.

Schiavione’s serve was a sight to see

Our next match, between Sara Errani (seeded 19) and Francesca Schiavone, was wonderful to watch not just for the play, but for the fact that they’re both Italians and this meant most of the crowd was Italian, calling out “Brava!” at a good shot and generally being a little more enthusiastic than your average crowd. Schiavone was great to see, going for broke on every shot and surprising most of us when she pushed it to a third set. At one point, she nailed a beautiful drop shot, and as we cheered, she ran over from the net and touched the cheek of someone in the crowd, this tender but triumphant gesture to a stranger.

Henman Hill or Murray Mound, depending on what generation you are. A place to sit and watch whatever match is deemed exciting enough to be put on the big screen.

Feeling a bit wiped from the sun and the excitement, we retreated to one of the two food courts before venturing out again. We walked around the whole of the grounds and dropped in on several matches here and there. I love that you can just do that. We refilled our water bottles for probably the fourth time that day, and reapplied sunscreen again. We walked by Henman Hill, where the large TV screen shows whatever match is most exciting at the moment, so the people picnicking or just resting can still see tennis. I got a good dose of the wandering and soaking up the atmosphere I’d been hoping for.

Shockingly, I was not invited to go through the royal entrance of Centre Court 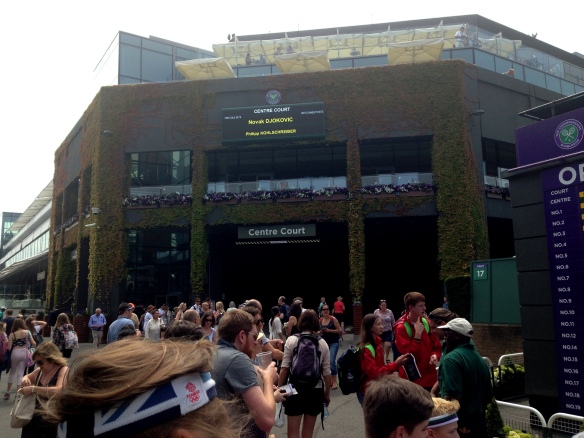 At about 6 pm, our paths diverged; Liz’s dad joined her and they went to watch a match at Court 7, while I stood in a short queue for a resale ticket and went to Court 2. If you see a match at the show court and then leave, they encourage you to have your ticket scanned when you leave so that they can resell that ticket to someone already in the grounds. All those monies go to charity, and people with grounds tickets can see matches after 3pm in the show courts. I paid an extra £5 (my original ticket was £25) and got a seat in Court 2–as it turns out, a really good seat nearly at the center and pretty far down the stands.

Walking up the stairs to Court No. 2 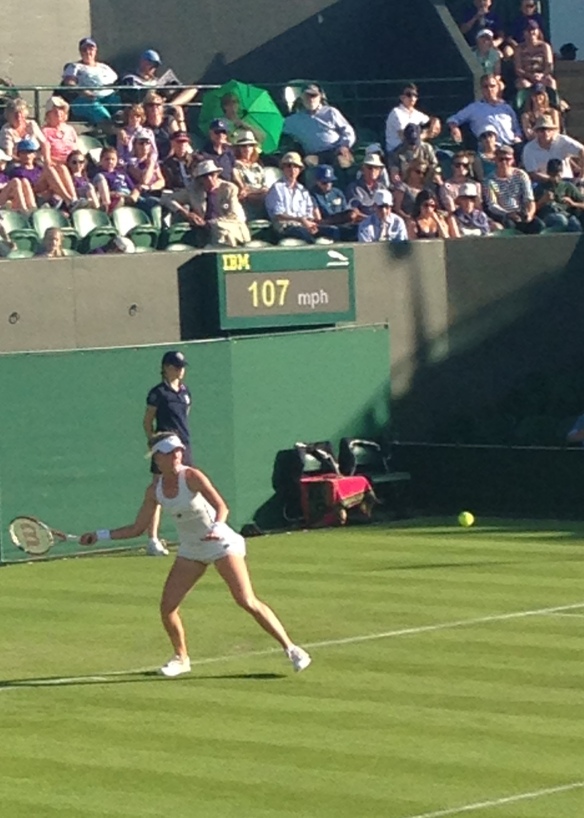 Riske put up a good fight, but Safarova’s return was wonderful to watch

I watched Alison Riske play Lucie Safarova (seeded 6), and this turned out to be another good match where the higher seeded player had to fight harder than she expected to get her victory. Riske pushed it to three sets, and she won several of the challenges she used on shots, whereas I don’t think Safarova won any of hers. Despite all that, Safarova won, much to the delight of the Czech man in the stands behind me (who tried to wave a giant Czech Republic flag only to be told by a steward that this violated the rules and he’d have to put it away–this is why it always looks so orderly on TV, because those stewards have sharp eyes out for any rules infractions). 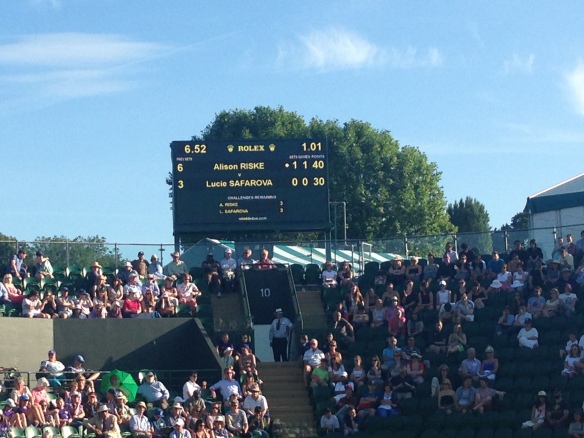 I squinted at the court in the setting sun and listened to the agreeable thwack of the ball and the less agreeable intimidation screeches of the players. I looked to the TV cameras in the media booth and wondered if my mom would see me on her screen back home. Bright green grass, bright white outfits. I smiled under my sun hat and sipped my Pimm’s cup; I’d had a day out at Wimbledon.

A day out at Wimbledon

12 thoughts on “A Day Out at Wimbledon”