“Let’s go to battle,” Liz said to me. I looked at her askance. As far as I knew, we were not in a fight. Also, she’s a trained fencer and I am not, so she has an unfair advantage if we’re battling. “No,” she said, “Battle, the town built up around the site where the Battle of Hastings took place.” Aha. 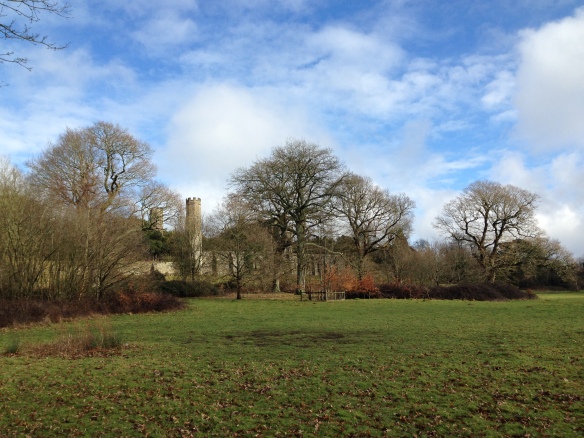 The battlefield at Battle

The year 1066 is famous in Britain for being the last time England was invaded. Duke William of Normandy came across the Channel, killed King Harold at the Battle of Hastings, and shortly thereafter assumed the crown as King William I of England. He commissioned the Domesday Book, which was the earliest extensive listing of property distribution in the Western world. He spent most of his reign back in France, and left England to his second son upon his death. I sometimes wonder if this is the root of animosity between France and England; England’s thinking, “You conquered us and then couldn’t even be bothered to stay?”

Liz and I took the train down from London, and then made lots of jokes about “striding into Battle” as we walked from the station up to to the English Heritage site. It was fine weather when we were there, but of course it had rained earlier in the day, so our walk around the battlefield was utterly muddy. 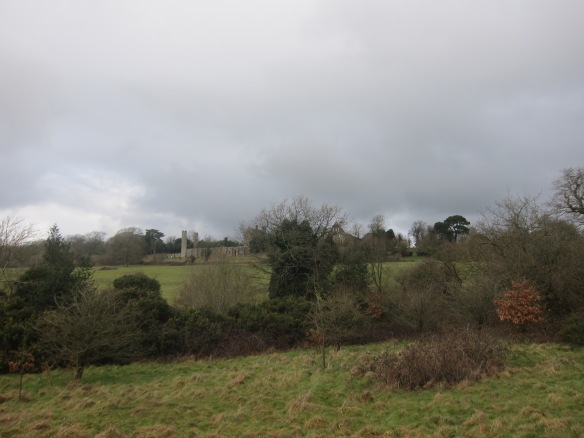 The battlefield is just that, a field that slopes up to the ruins of the abbey that William built as atonement for the bloodshed that took place there. There’s a path around the field, with plaques along the way that lead you in chronological order through the battle. I also used the audio guide from the visitor’s center, which was excellent. 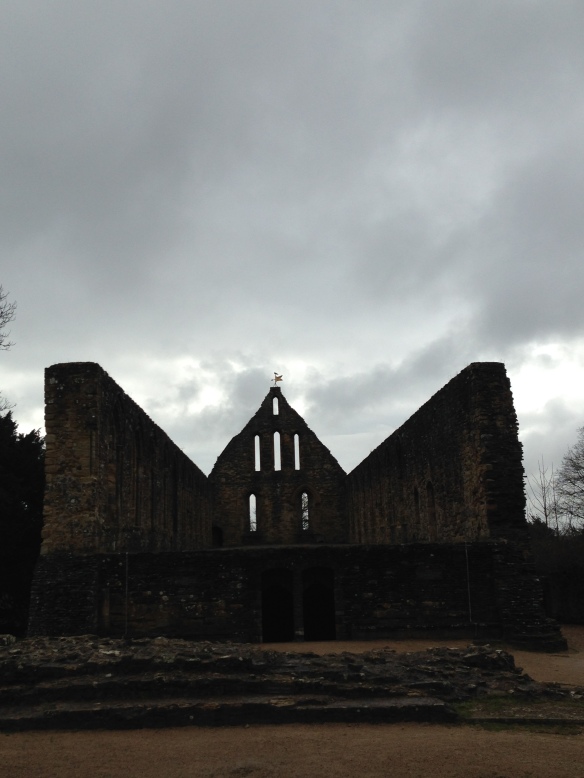 The ruins of the abbey

I love this architecture

We squelched around the battlefield and did a little fake fighting (I was on the losing side–told you she’s a fencer), and then we walked around the abbey. Built as it was on a hillside, the abbey had some odd heights inside it, where the farther up the hill you went, the lower down the ceilings were. I would have thought architects would have compensated for that, but no matter, it just made the ruins a little more mysterious. 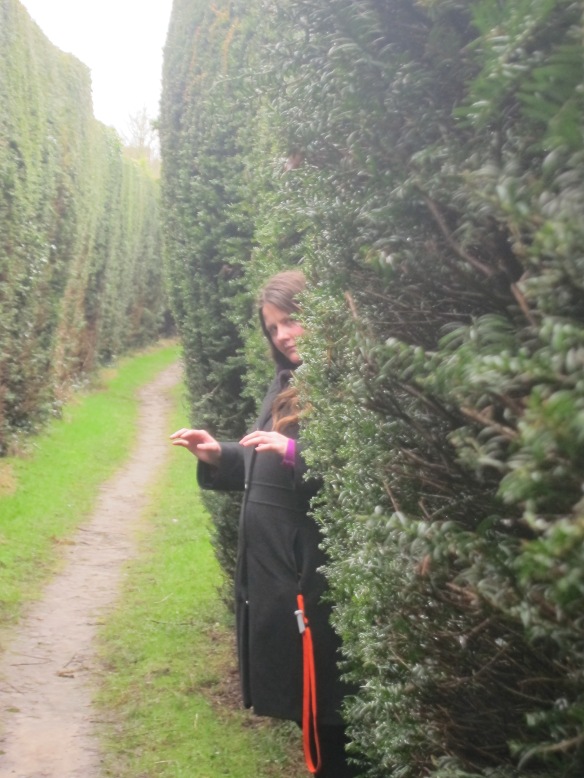 Fixing the spelling so it’s a better pun 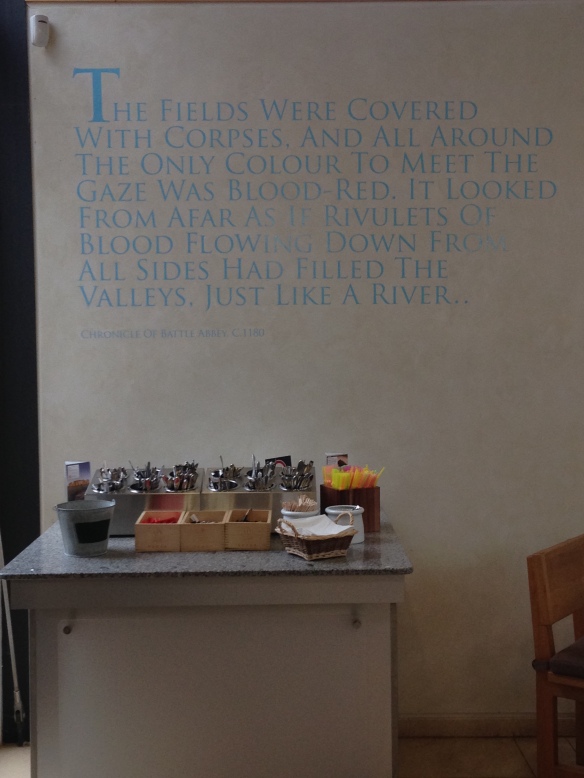 Why on earth would you put this quote by the condiments section of the cafe?

After we strode victoriously out of Battle, we took the train down to Hastings, which was a larger town than I’d expected. I walked to the ocean’s edge to put my fingers in the water, and managed to soak my shoes through, making that the second time that day they’d been soaked through.

The beach at Hastings

A grand building in Hastings

But never mind that, or the fact that the funicular closed just a few minutes before we got there. Because there was a tiny train, and the tiny train was still running. We gave our money to the kid whose mom ran the train, and then took a comically short ride along the waterfront that was part working docks and part gussied-up tourist attraction. 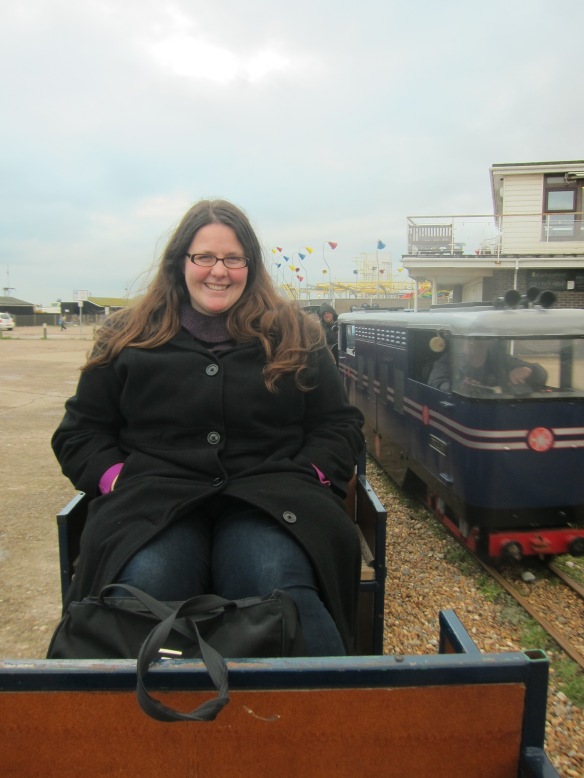 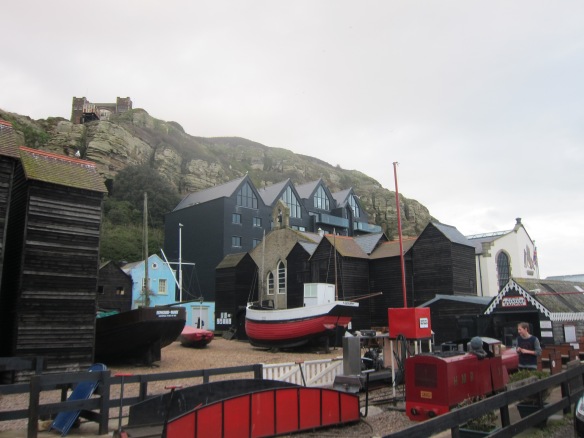 The tall fish huts of Hastings

The boats of Hastings

We ended up near the old town, and found that there was a sort of traveling music show going on. We picked a pub, grabbed a drink, and watched as different acts came through for 20-minute performance slots, before they moved on to the next participating pub. It was mostly folk or new folk,and pretty good, but one woman stood out as sounding like a new Sandy Denny. The whole pub hushed as she sang part of her set a cappella, and it was almost a disappointment when the instruments joined in to back her up. That was a lucky find.

Along the tiny railway tracks

Hastings being a major fishing town, clearly we had to have fish and chips for dinner. But most places were either shut for the night or full to bursting with the music fest crowd. Finally, we found a mom and pop place, and sat down to a good meal served by the most distracted servers I’ve ever encountered. We worked out that they were trying to close for the night, but they kept letting customers in. I wanted to share with them the secret that if they wanted to close, they had to turn people away. Advanced Restaurateuring, right there. 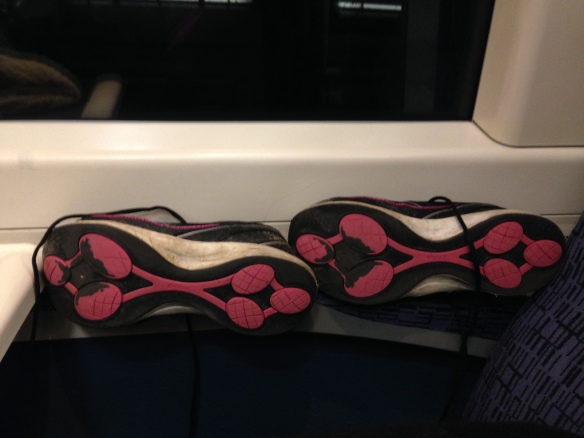 Drying my shoes out on the heater of the train