Wellington may be the coolest little capital in the world, but Ljubljana has to be the loveliest. The small city sits in the center of Slovenia, on the Ljubljanica River, and it’s made up of a mix of Venetian and Viennese architectural styles, well-placed parks, a large cathedral, and a castle upon a hill. 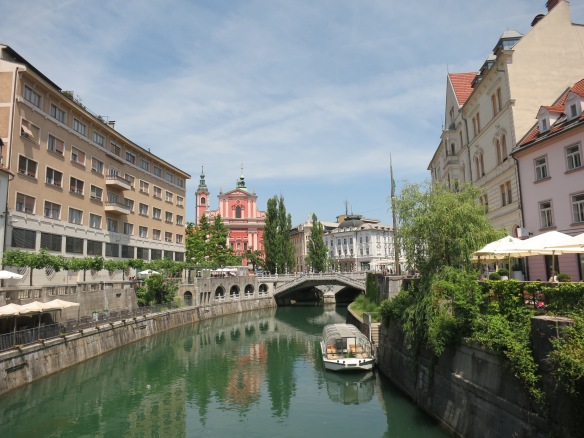 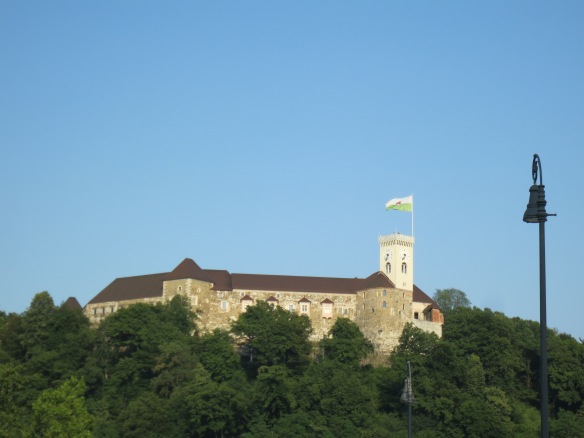 I went on a free walking tour with a guide who threw some dark humor into his spiel and then apologized, saying he’s a stand-up comedian and these get laughs from the locals but he has to remind himself they don’t work on tourists. Aw, keep trying Mr. Guide-man, let your morbid culture shine through.

We started the tour in Prešeren Square, named after the national literary hero France Prešeren, who lived out his unhappy life in the first half of the 19th century. Prešeren wrote in Slovenian, which contributed to a sense of national identity for the country. He also carried a torch for a young society woman, calling her his muse. So much is made of his unrequited love for her that the statue of Prešeren in the square named for him gazes at a building across the square, which contains a carving of this young muse, so that they can look at each other for eternity. He was 33 when they met, and she was 16. Muse indeed. 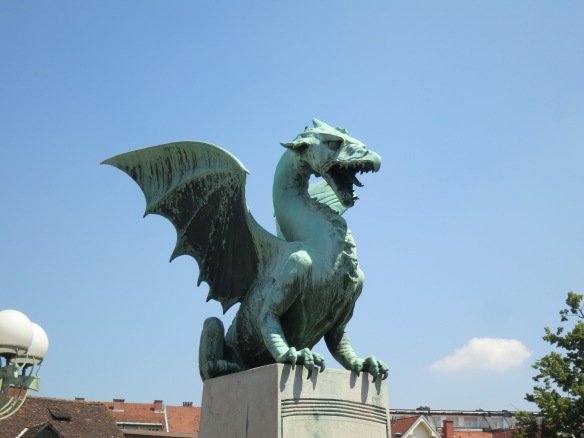 The symbol of the city

We crossed the Triple Bridge, designed by Jože Plečnik along with much of the rest of the city in the interwar period. Two bridges were built to flank the main one, to prevent bottlenecking in the city center. We walked along the river, past the fish market and produce market, until we arrived at a bridge guarded by an impressive bronze dragon. The dragon has become a symbol of Ljubljana, although its origins may have just been looking cool on a coat of arms. Legends tie it to Slavic stories of ensuring fertility, Greek myths of monster slaying, and Christian tales of paganism defeated. 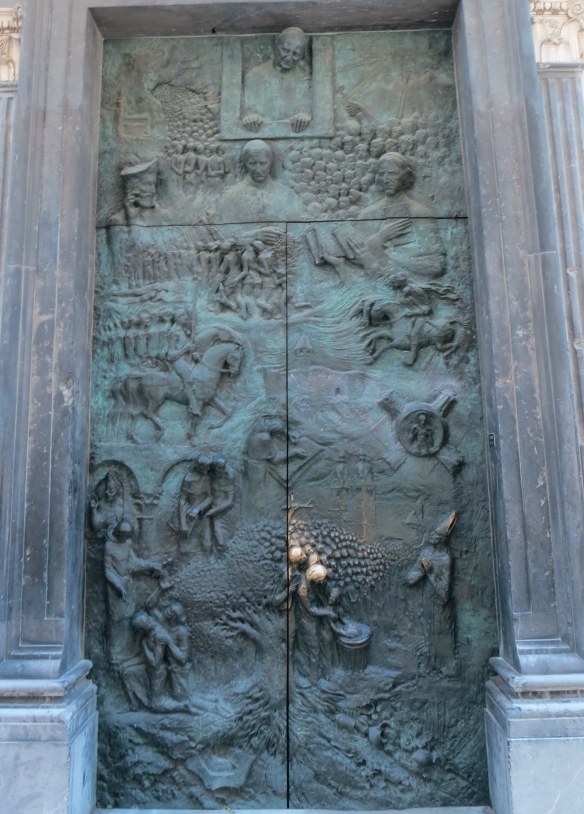 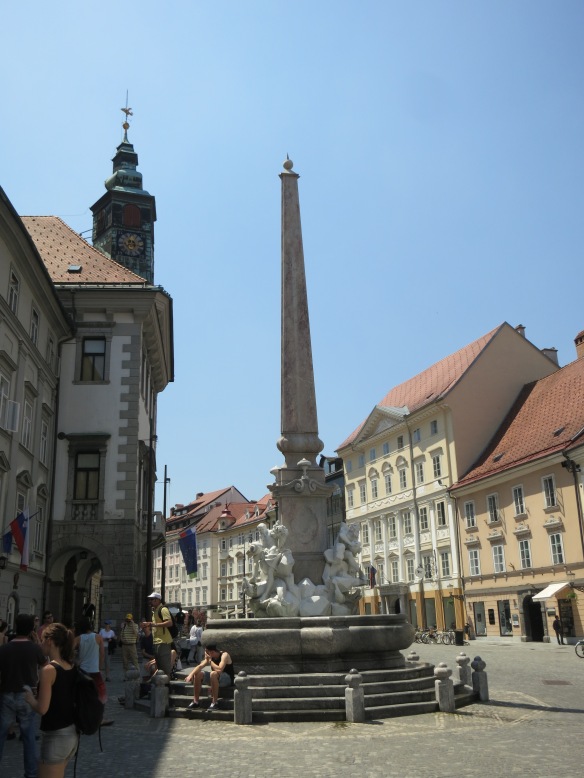 The cathedral of Ljubljana was visited by Pope John Paul II in 1996, and prior to his visit a large set of bronze doors was installed depicting the bishops of Slovenia preaching to large groups of people, overlooked by a carving of John Paul himself. Beyond the alley containing these doors, the street opens out to Town Hall and an uninspiring but popular fountain on the square. We ended the tour in a major outdoor music hall, where our guide dipped into politics for just a few moments, as anything concerning Communism and the Balkan Wars is understandably a touchy subject in this region. 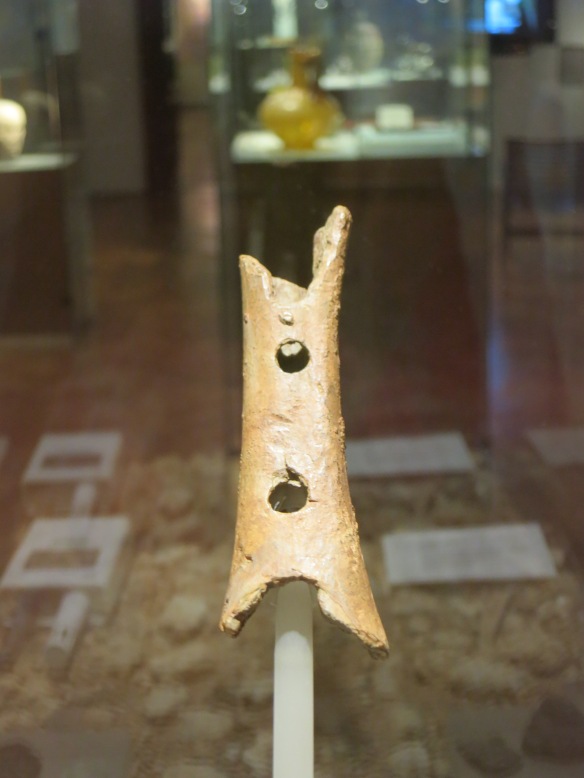 Replica of the oldest musical instrument ever discovered 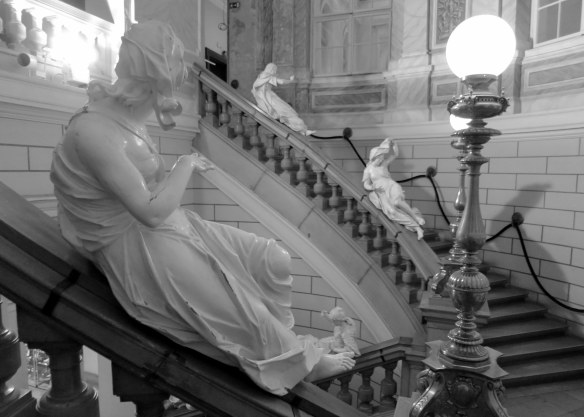 I loved these ladies (muses of learning, perhaps?) surfing down the stairs in the national museum

I visited the national museum to see the world’s oldest musical artifact, but when I got there, I saw a small sign informing me that the real thing was in storage, and this was a replica. A little disappointing, but it’s still cool to know that the original flute has been dated to 45,000 years ago and is the first musical instrument to be confirmed as a Neanderthal creation. We’ve been musical since before we’ve been fully human. 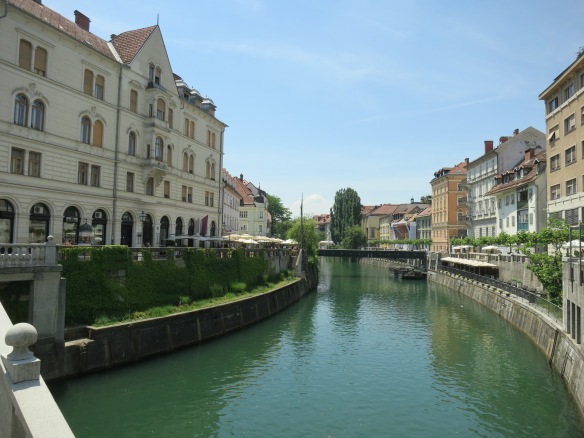 Along the Ljubljanica River

There’s more to see in Ljubljana on another visit–the castle and an artist’s district near the train station, to name just a couple things–and it only takes a glance through these photos to see that I can’t be far off in naming Ljubljana the world’s loveliest little capital. 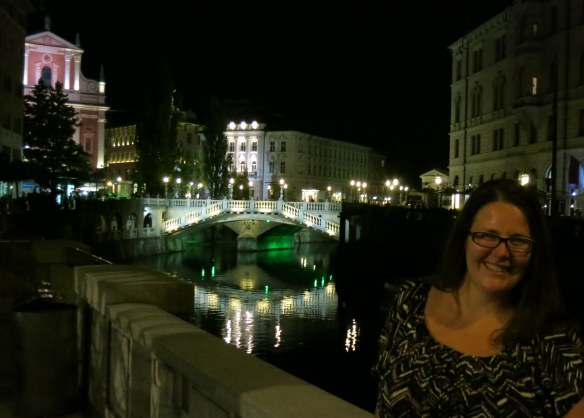 The Triple Bridge at night