Every single town in South America has a central plaza, often called the Plaza de Armas or Plaza Mayor. It’s the colonial influence–the Spanish built the main church in a central plaza and a grid system of streets emanating from it. (I’m not sure what it’s like in Brazil, where the Portuguese held power.) Even tiny towns have a central plaza.

Nice little backdrop to your church

The one in Chivay has been renovated in recent years, and it’s a pleasant place to spend some time while you’re, say, grinding your teeth in frustration because guides and hotel staff alike assured you that you could Skype in this town but it turns out even the internet centers are so slow that they don’t download Skype and the call centers don’t make international calls and you have a phone date on your birthday with your parents that you have to cancel via basic HTML email. Just for example. 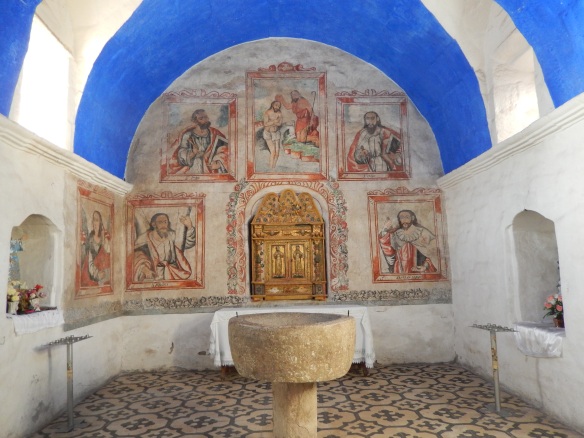 Inside the church of Chivay

The night of my two-day, one-night tour, most people opted to go to Pizzeria El Horno, a large restaurant only open for dinners, which caters to tour groups on a nightly basis. Our group got the head table, right across from the tiny stage for the musicians, and right in front of the bit of floor used by the dancers. The food was mediocre to fair, but the entertainment was terrific.

The band, on the tiniest stage I’ve ever seen

This was a peña, a popular Peruvian dance hall event (as with most local traditions here, there’s a range of peñas, from the small and local to the large and touristy–guess where this fell). The band leader called out the names of the dances and then away they went. Some of the dances were clearly based on important traditions, like one involving agricultural symbols and movements. Others just looked fun.

The dancers wore different outfits for each dance

Probably the one that had us all the most entranced was the condor dance, which involved the man moving like a condor flies, stealing an onion from the woman, taking a bite, and falling to the floor on his back, at which point the woman takes out a strip of cloth and beats him with it, eventually putting her skirts over his face to revive him. He gets up and it repeats with her stealing the onion, etc., and then he picks her up and spins her around until they’re both dizzy. Probably there is more to it than that, but it was a sight to see. 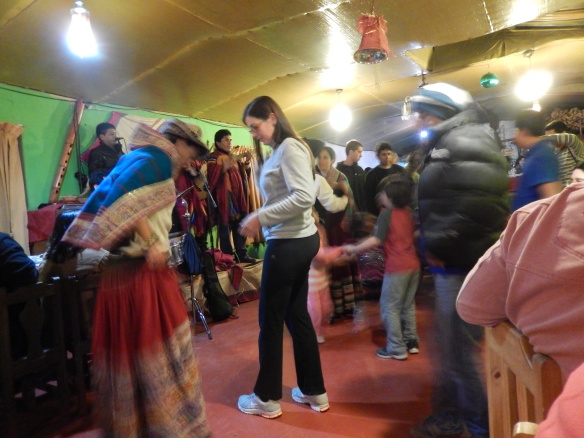 By the end of the night, the dancers had dragged half the audience onto the dance floor for a big circle dance, and then they put costumes on people. The kids in the crowd loved every second of it.

The next morning, we got to see actual condors fly. (I did not notice any onions, beatings, or resurrections.) Condors are magnificent birds; they’re the heaviest airborne bird, and their wingspan can reach 3 meters, just under that of the albatross. They mate for life (males sometimes commit suicide if their mates die first), and they can live until they’re 75 years old. Because they have such a long lifespan, their aging process is not dissimilar to ours; they spend two years in the nest and are able to start reproducing at age 15. When they’re young, they’re brown, and they gain black feathers when they’re older; males grow a white collar around their necks. 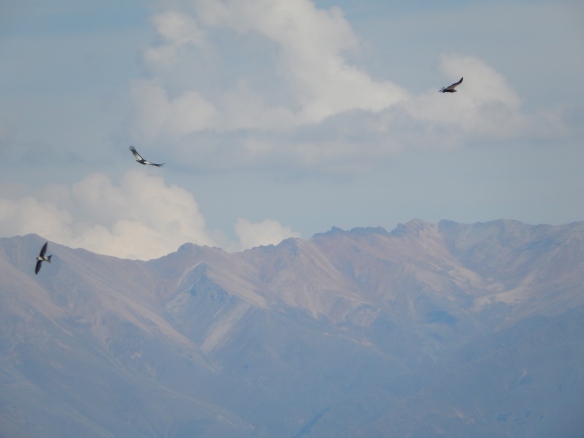 Apparently, the Andean condor here has just one predator–a hummingbird! Hummingbirds are very territorial, and if condors get too close to this one type of hummingbird’s food supply, the hummingbird will use its long beak to go for the condors’ eyes. Never would’ve guessed it.

Because of their weight, condors try not to fly unless they have a little help, so their most active time of day is in the mornings, when the thermal drafts of the canyon are strongest. They don’t fly in the afternoons or evenings. Instead, they stay in the nests they build in holes in the walls of the canyon. We were lucky to see at least 10 condors soaring on the wind, against the glorious backdrop of the green, rugged mountains.

The adults flew above and away from the young ones, sometimes dived below (to get to a nest or a snack?), and only occasionally stopped by to check on the young ones. They must not have been too young.

(A woman at my hostel in Cusco informed me that the reason that particular site is so popular for viewing condors is that the national reserve staff push animal carcasses over the edge of the canyon, drawing the non-hunting birds. If that’s true, it means the animals aren’t quite as wild as I’d thought, but I don’t think it diminishes the experience.)

Happy birthday to me

When I asked some people in my group to take my birthday photo for me, they burst into “Happy Birthday” in Spanish, which was embarrassing but sweet. Later, the group took a one-hour walk along the canyon’s edge, taking more photos, learning more about condors, and appreciating being away from the crowds at the Mirador del Condor. 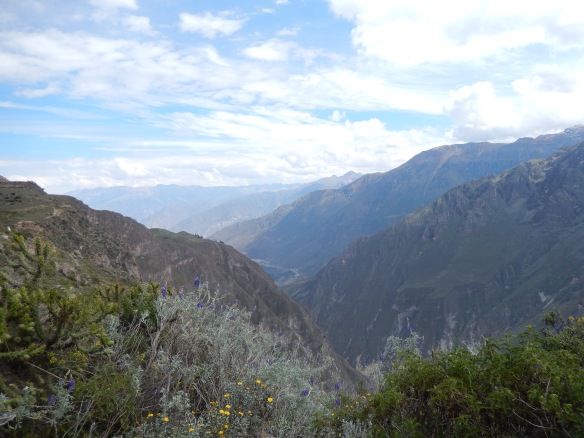 We had a quick lunch in Chivay and then began the journey back to Arequipa, this time with no stops. My last glimpse of the Colca Canyon was of a bright yellow flower swaying in the breeze on the edge of a cliff, while the green mountains stood watch behind. 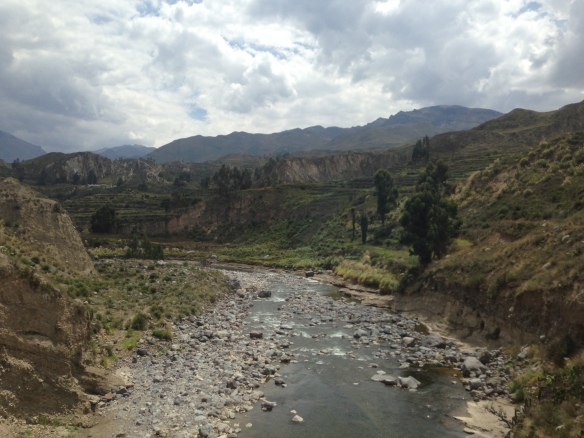 There were a lot of pretty yellow, red, silvery, and purple flowers along the canyon