My first two days in Melbourne: a fully stocked costume rental shop, where my friend and the sales guy refined her Gothic Lolita dress and another customer asked for tips on making his outfit more “Jesus-y”; a burger joint that names all its sandwiches after members of the fictional Huxtable family; a store with handwritten notecards describing each whimsical item for sale; a Scottish ceilidh in a community hall, all attendees clad in plaid. A place so fun and just a little too pleased with itself, I felt almost at home. 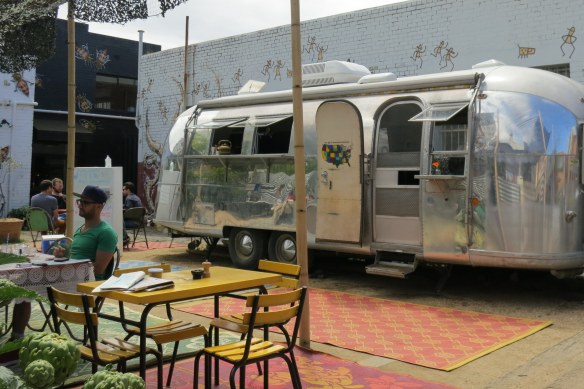 Theresa and I know each other through mutual friends in Chicago, but she’d moved to New Zealand shortly after I moved to the city proper, so we never really got to hang out in the States. She moved to Melbourne a couple years ago, and is huge on the Couchsurfing scene there. She offered me an air mattress spot in her cozy home for the duration of my stay in town, which turned out to be a full week (generous!). We had a lot of fun hanging out. 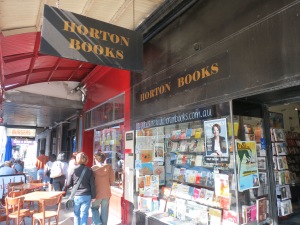 It’s gratifying to see so many bookstores still about.

Theresa lives in the Fitzroy neighborhood of Melbourne, which felt so similar to Logan Square in Chicago that I had the strange sensation of comfortably navigating my way around the hipster hangouts of this city. I found bike shops, bespoke clothing shops, and expensive bars with good liquor. Of course, it is its own place, so I also saw things I’m not used to, like houses with ornate lacework gates, and women’s names painted on the facades; giant Russian nesting dolls decorating the lawn of the public housing block; and a storefront proclaiming the community service goals of a law firm. 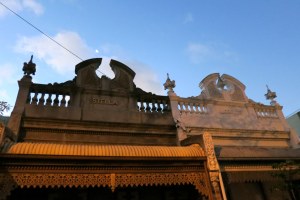 I found the names on the house facades a little creepy. They reminded me of headstones. (Names here are Stella and Loretta, in case you can’t see.)

Melbourne itself is a pretty city, with pockets of green everywhere, a river wending its way through town, and elegant Victorian buildings lining the streets. It does have the disadvantage of being set up on hills in the downtown area, but I realized later that was just good practice for the mountains that make up all the walking areas of New Zealand. 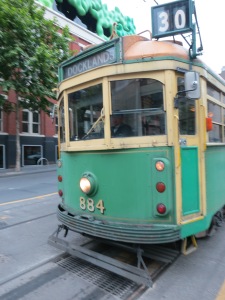 The main part of Melbourne is set up on a grid, and the residents are proud of the tram system that trots throughout the city. There are all these signs reminding you not to steal a ride on the tram, but after the third or fourth time my tram card deducted more than it should have for a ride, I did as many residents do and just stopped paying. (While I was in town, the transit department came out with a fun, morbid little video that made the rounds on Facebook. Now that song is in your head. You’re welcome.) 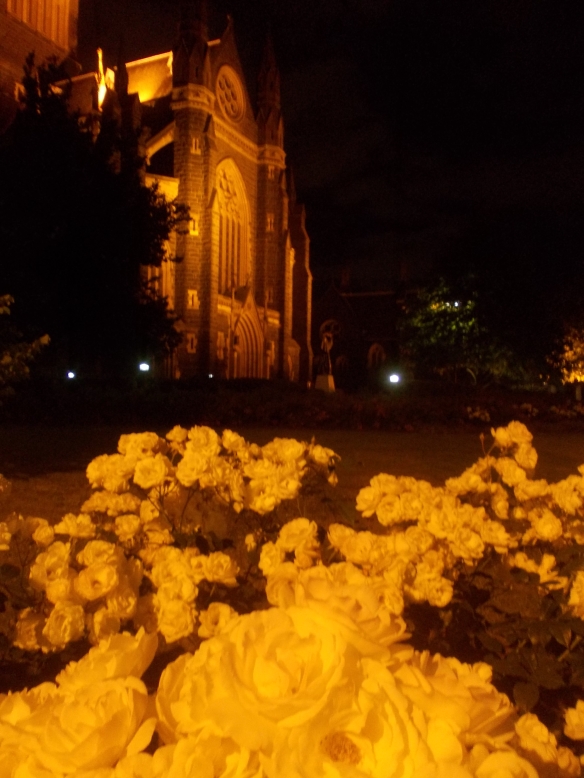 St. Patrick’s Cathedral by night (no photoshop; all the lights were yellow)

I took the free tourist bus around town, to get a glimpse of the main attractions. I did get glimpses, but glimpses only, because most of the time the bus was too crowded to get a proper look, and we never stopped anywhere longer than it took to pick up more passengers, so overall I don’t recommend the tourist bus. It’s a concentrated downtown area and wouldn’t take too long to just walk around. 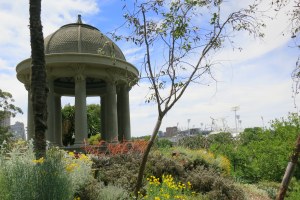 I visited the Royal Botanic Gardens, which, like their counterpart in Sydney, were sprawling and well-tended. Paths squiggled all over, and soon I found myself in the middle of who knows where, resting by some roses wilting in the heat, then following some birds down to a lake and watching kids play. There were several signs indicating the various water-saving measures the caretakers have instituted–reducing use by 60% between 1995 and 2005, which is mighty impressive. I saw black swans and their nearly grown cygnets, packs of schoolchildren on field trips, and a grove of ferns actually labeled “Fern Gully.” 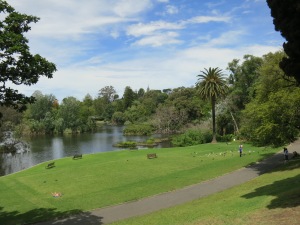 I saw the end of a concert at Federation Square, the recently revamped public square near the river. I glimpsed Rod Laver Arena, where the Australian Open tennis final is played. I ate a delicious dinner of trini curry chicken, roti bread, and garlic pumpkin from a Trinidad & Tobago stand at the Queen Victoria Market. I helped Theresa make purple sweet potatoes for a Thanksgiving feast high up in a Docklands building. 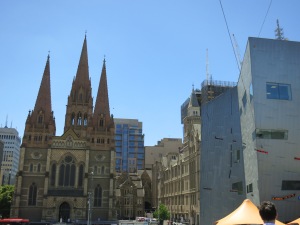 Did I mention the ceilidh? Because learning Scottish folk dances with septuagenarians was a seriously fun way to spend a Saturday night. One lady even distributed homemade “Happiness Kits” to all the women in our group. I kept it til I met someone who needed a pick-me-up, and then passed it on. 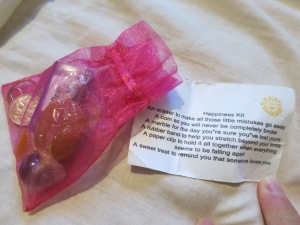 Oh yeah, and I saw penguins.

St. Kilda is a neighborhood on the harbor, and it rivals Fitzroy for funky goings-on and arty denizens. Its long esplanade is full of people jogging and roller blading (roller blading! in 2012!). I walked past fishermen on my way down the long pier, and at the end I read the sign about the blue penguins that nest here. 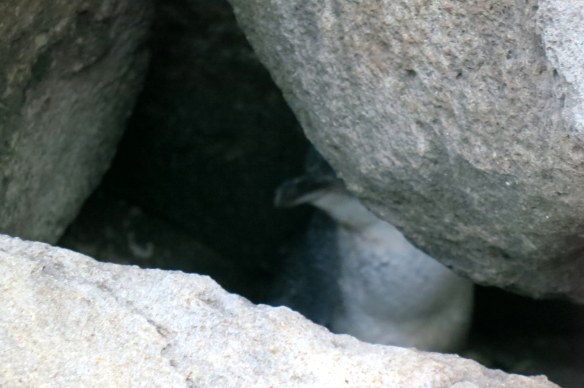 Blue penguins, or little penguins, are the smallest species of penguin, so the cute factor is upped considerably. A colony of them call the rocky breakwater at the end of the pier home, and for over 20 years they’ve been studied by scientists in this, their natural and wild habitat. It seems strange to call them wild, when they’re paddling past yachts at anchor to return to their nest every night, but they are wild. They aren’t bred or fed by humans; they just chose this spot because the harbor doesn’t have sharks or other predators, so it’s safer than some other places they could live. 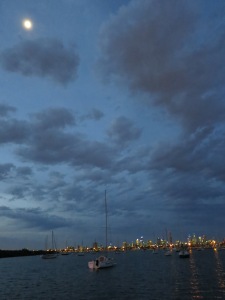 Volunteers in safety vests roam the rocks, enforcing the rule that says no flash photography or regular flashlights are allowed, and shining red flashlights behind rocks so visitors can see the penguins (the red light doesn’t bother them like the white does). Unlike Philip Island, which has set up a paid park system to manage the many visitors, the structure here is loose, and that works in large part because the lights of the city confuse the penguins so they aren’t sure exactly when it’s dark, like they are in places more removed from humans, so they trickle in at various times, rather than all in one group. (The lack of predators also makes this possible, whereas the Philip Island penguins need to travel in a group for safety.) 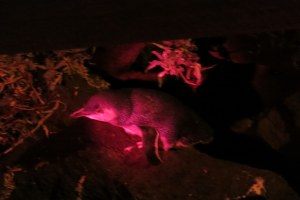 Before sunset, I was peeking at a baby penguin, or trying to anyway–it had hidden itself pretty well–when a young girl came right up to me and said, “Do you want to see one better?” and pulled my arm before I could answer. She was right; I could see this one more easily. Thanks, little girl. The crowds got a little pushy, but mostly stayed polite and listened to the volunteers when told to give the penguins more room. At one point, a penguin stood at the top of the rocks and groomed itself for a good five minutes, then sauntered across the path to the other side of the rocks, and it was just like paparazzi photographing a movie star. 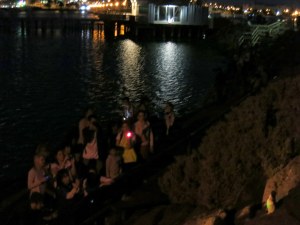 When I had shingles in Byron and it looked like I might not make it to Melbourne, Theresa tried to make me feel better by saying that it’s more a city to live in than to visit, and I see what she means. There aren’t too many ‘must-see’ sights, and it’s more a matter of hanging out and soaking up the atmosphere. But that’s often the best part, especially in a place that feels like somewhere I could have lived in another life. 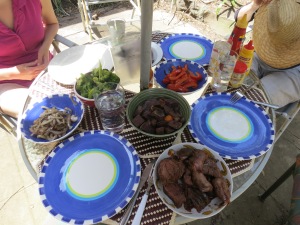 I went to a riotous party with Theresa, her boyfriend Sebastian, and friend Jez, and the next day we cooked up some ‘roo on the barbie and had a proper Sunday roast, Australian-style. We went to a pub quiz in St. Kilda and lost all the Australian-focused questions but won a couple random drawings that got us a round of beer for 20 cents each. What with the great weather and the excellent hospitality I experienced, Melbourne is easily the best city stop on my trip so far. 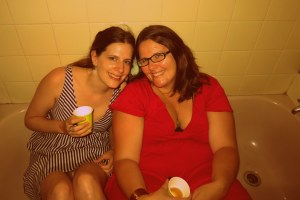 Bathtubbin’ at a party with Theresa, hostess extraordinaire

5 thoughts on “Melbourne: A Home Away from Home”