I researched this trip before I started it, but the more I travel, the more I realize I didn’t research nearly enough. I mean, I didn’t even know there was a rainforest in Australia, much less that it’s the oldest one in the world! The Daintree Rainforest is estimated to be 180 million years old, which puts it back at the time of dinosaurs. Plants grow here that were previously only found in fossilized form. And as a bonus, the main section of the rainforest visited by tourists is evocatively named Cape Tribulation. 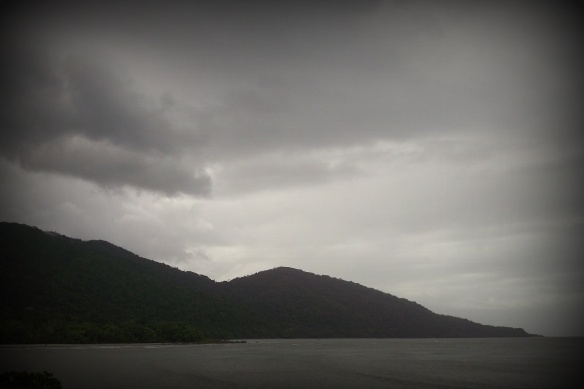 The phrase that all the promo materials repeat is “where the rainforest meets the reef,” because it’s the only place in the world where a rainforest comes right down to an ocean reef. It will not surprise you to learn that there is a large concentration of World Heritage Sites going on here. 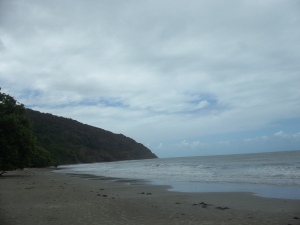 Long walks on the beach

I took a two-day trip to Cape Trib (remember, this is Australia, so you must shorten as many multi-syllabic words as possible) with Active Tropics Explorer. Our driver was a loquacious middle-aged man, who told us as much about his diving prowess as he did about the natural wonders we passed. That was only mildly annoying, but he crossed a line when he described what he wears while diving, and said he doesn’t wear the tight-fitting bodysuits because that makes him “look gay.” Way to live up to nasty stereotypes about bigoted outdoorsy Australians, dude. 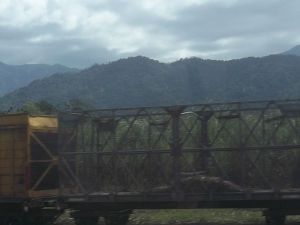 Sugar cane is huge industry here. The companies built a railway just to transport the sugar cane–the gauge is too small for passenger or other freight trains. You’ll see tiny little tracks all over Queensland, made to carry sugar cane trains.

Aside from that, he was a pretty good guide. He clearly loves the area, and it’s always nice to be shown around by someone with such a passion for the place. We started out in Cairns, and he drove us north on the extremely windy Captain Cook Highway. We didn’t stop for any pictures on this picturesque drive, which was too bad, but we all got our cameras out at the second stop: a crocodile tour on the Daintree River. 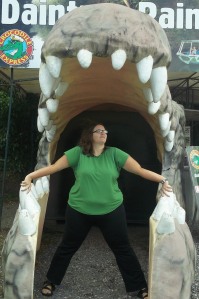 We piled into a long, flat-bottomed boat, which puttered down the river slowly. Everyone scoured the banks for logs that might actually be reptiles, and the boat captain told us about saltwater crocodiles, which trickily live in both fresh and salt water, and which kill at least one person per year in Australia, so quickly that it’s hard to know what’s happening until you’re snapped up in their massive, powerful jaws. Crocodiles haven’t changed much since they lurked in primeval waters, and their dispassionate stare and long, deadly bodies give me the creeps. Probably just as well we didn’t see any. 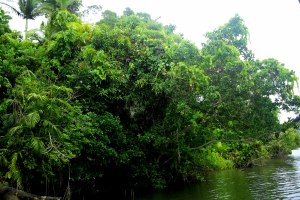 What’s lurking in those mangroves?

Instead, we heard fun facts about the many species of mangrove that line the river bank, and then crossed to the other side of the river, where our driver/guide was waiting for us. We went on even more winding and steep roads, and heard about the activists who protested the government bulldozing through the rainforest to build this road. The road was eventually built anyway, but the international attention the activists gained helped ensure that the rainforest–previously unprotected–was given the protection afforded by a World Heritage listing. See now, that is why you stage protests. They’re rarely the final say in a public debate, but they’re often the necessary catalyst to get those debates on the right track. 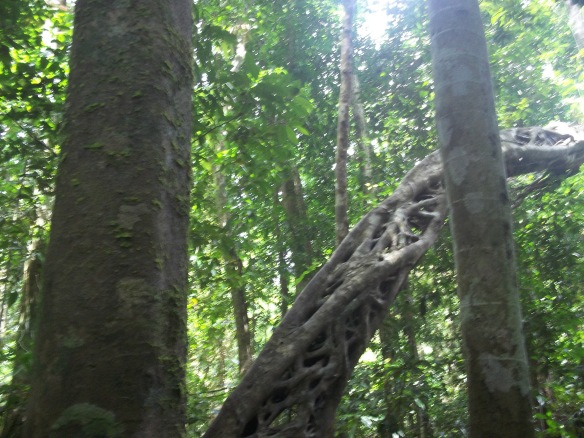 Intricate latticework on this tree

We stopped for a short walk on the Maardja Botanical boardwalk. We inspected basket ferns (which look like Mother Nature’s hanging baskets), cane vines (which are made into cane furniture), ferns with sharp spikes all along the edges of their leaves, and mud pits with trees poking their knobby-kneed roots in the air. 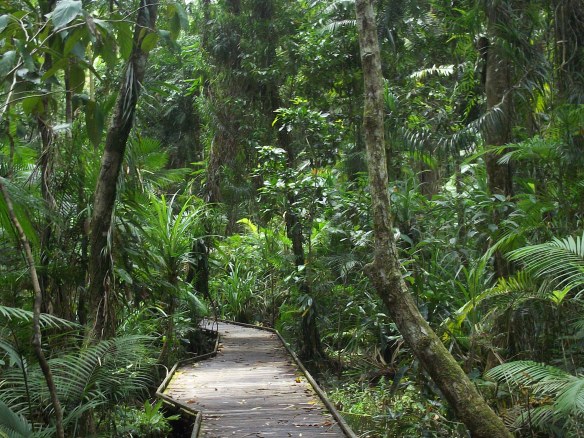 About halfway through the walk, our guide picked up an ant that was marching along the guardrail. As the ant squirmed in his fingers, our guide said, “Anyone got some tequila on them? Maybe some salt?” And then he licked the ant’s butt. “Lime!” he exclaimed. The green ant, which looks slightly irradiated, has an acidic taste to it that reminds some people of lime. Our guide found another ant and held it out to guys in the group, and one by one they all turned him down and walked away. He turned to me jokingly, but I am not one to turn down silly, harmless antics, so I said, “sure!”

And then I licked the ant’s butt. It did, indeed, taste a bit like lime. Not something I’d add to my margarita, but it was fun to do. 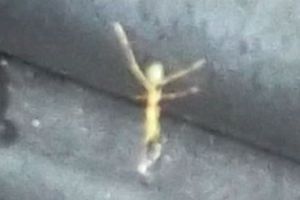 I don’t have any pictures of me tasting this ant, but trust me, it happened. (Blurry quality because these guys are small and fast.)

Cape Tribulation is so named because Captain Cook hit a reef on his way along the shore, then hit it again on his attempt to find deeper waters. That’s like hitting the concrete curb on your way into a parking stop, and hitting a car as you back out of it. If you look out at the ocean from the beach here, you won’t see any signs of a reef, so I suppose I can see how he made the mistake–the first time, anyway. 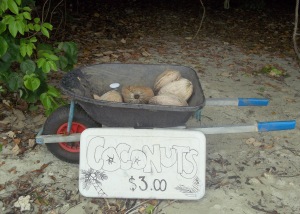 Our guide dropped us off at one of the hippest YHAs I’ve stayed in, and then we had an afternoon to do with as we pleased. Stinger season had just started–because why have crocodiles as the only danger when ocean swimming in Australia, when you could also have invisible jellyfish to take you down with one sting?–so I did not go in the water. Besides, it was a rainy day in the rainforest. I waited til it was mostly clear, then took a walk along the beach to a lookout on the cape. I passed coconuts in their hairy husks and a heron who tried to give me the slip with the most comical evasive maneuvers I’ve seen in a bird. I skirted mangroves and inspected pockets of tiny balls of sand, which look like someone made Dippin’ Dots out of sand. I still have no idea how they come to be. 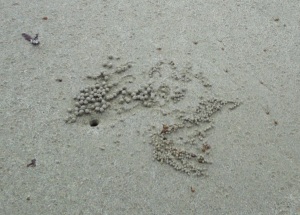 The crop circles of the beach

On my walk to dinner, I passed a bird walking along the path and excitedly took a picture. Then I saw about 10 more of them in the next hour, and was informed that this is the brush or bush turkey, a very common Australian bird (which showed up in my Thanksgiving post). An uncommon bird found in these parts is the cassowary, which looks a bit like an emu with a bump on its head. I didn’t see one, but that’s not too unusual. 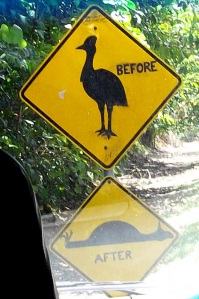 Cautionary art–the cassowary above, the speed bump below (turned into dead cassowary, should you go too fast)

The next day, after a leisurely breakfast, we piled back into the bus with a new driver/guide. She was the opposite of the first guy in so many ways–a hippie who spoke frequently and seriously about “the good vibrations of this special place” and the karmic complications of getting what you wish for (as illustrated by the story of a tourist who saw a croc and poked it with a stick to get a good action shot on his camera–and got his leg nearly bitten off).

We went to the Daintree Ice Cream Company, which grows all its non-dairy ingredients onsite. Each day they offer four flavors in one cup for $6, so we all bought a serving and ate our apricot, raspberry, macadamia nut, and wattleseed on the bus. (The apricot was delicious, the wattleseed a bit sharp but nice.) Afterward, we drove to Alexandra Range Lookout, so we could see the river flowing into the sea and some cockatoos squawking overhead. 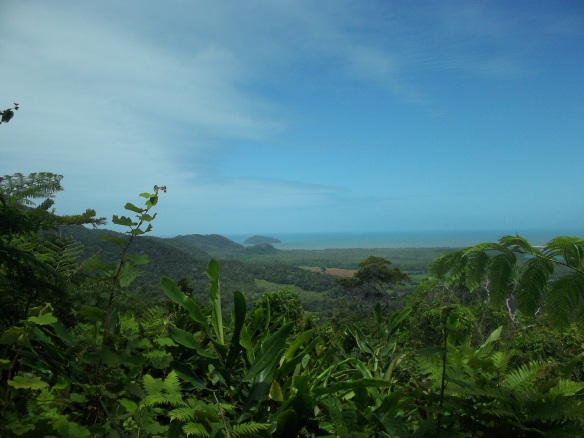 View from Alexandra Lookout–weather was nice as I was leaving!

We drove out to Mossman Gorge for a short meeting with a representative of the local aboriginal group, the Kuku Yalanji. He talked about learning from his uncle about when to hunt, when to move to the seaside for a few months, and so forth, all based on traditions dating back thousands of years. He showed us some of the white body paint that you may have seen in photos of aboriginal people, and explained that for his people, this was used when meeting people from other groups (the word “tribes” is inaccurate in regards to groups of aboriginal people of Australia). 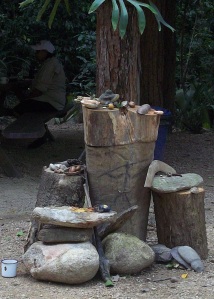 Artifacts used in the presentation

Next, we went to the Mossman River and walked along the path there. I liked this path a lot, because it was dotted with signs that didn’t just describe the natural sights around us, but also explained how human efforts to help the environment directly helped preserve those natural sights–like “your recycled milk bottles built this boardwalk,” etc. 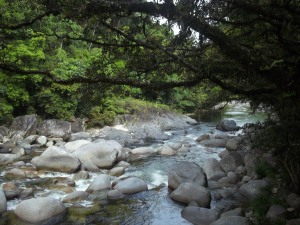 People gathered at a little rocky beach, and some brave souls got in the cold water. After a little dithering, I decided what was my Michigan upbringing for if not to prepare me for all types of swimming conditions, and I got in too. It was great! Fish swished by my ankles, the current carried me rapidly downstream, and for the first time all weekend, the sun shone. 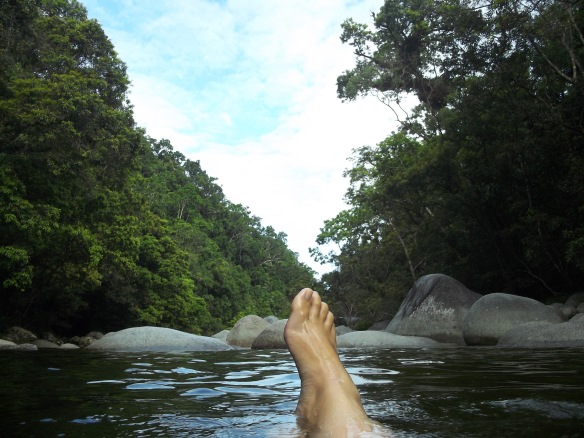 This, as they say, is the life

The Daintree is the first example on my trip of the advantages of listening to tour company employees when they recommend sights. Sure, they’re selling you something, but sometimes that something is totally worth it. It may be the first example, but happily, it isn’t the last. More to come!

8 thoughts on “Delving into the Daintree Rainforest, or Licking the Ant’s Butt”