Greetings from exotic Chicago! I am back on American soil and happy to be so. A report on the airplanes: about as uncomfortable as expected, but no worse so. I sat next to a man on my O’Hare-Heathrow flight who said that United is the worst of the major airlines, because they took all the inches of legroom in Economy and moved them to Economy Plus, where you pay an extra hundred bucks for the privilege. I certainly felt the difference. I was squished just sitting in the seat, of course, but trying to find a relaxing pose for my legs proved highly difficult. Especially on the eastward flight, you want to sleep, so stretching out somewhat is important. I must’ve looked like a college freshman eager to prove my comic chops on my improv troupe tryout, as I first spread my legs like a dude, one foot in the aisle and the other edging into my neighbor’s space; then pressed my legs together and sat low in my seat to shove my feet under the seat in front of me; then threw my weight to one side of the seat and wiggled my hips and legs toward the other side two inches away; then pulled my legs up and held them in mid-air; and finally settled on a rotating roster of all these options. I didn’t sleep on that flight, and it wasn’t from excitement to be traveling. I did pony up the extra cash for Economy Plus on my return flight, and if anyone has any doubt that the airlines’ anti-fat policies are anything but profit-grubbing, they only need look at that Heathrow-O’Hare flight to see the ten of us who’d paid extra spread out, while everyone else who could barely afford the basic ticket sticking it out in the back. Hell yes I paid more to make it through the eight-hour flight. Lucky for me I had that option.

But anyway. The time I spent NOT on airplanes was pretty great. I saw a lot of family and friends, and even got in some sightseeing. I can show you pictures of the pretty, pretty canals I saw in Amsterdam, the windmill I passed in Utrecht, and the queen I dined with in London (juuuuust kidding on that one), but instead, let’s take a look at some of the less-trumpted sights of these fair cities, shall we? Because I saw some damn funny things. Without further ado:

The Top 10 Unknown, Can’t-Miss Sights of My European Adventure 2010

(P.S. Formatting is way funky on this thing. I was trying for something cool and it didn’t quite work. And now I’m too tired to redo it or try again, so I’m leaving it as is and hoping you’ll find it charming. Isn’t that the American way?) 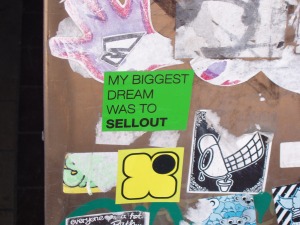 the happiest trash can in the world -- Marina's favorite tourist spot

snack time, anyone? (no, not me either) 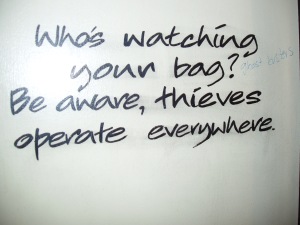 who ya gonna call? 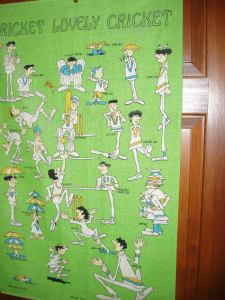 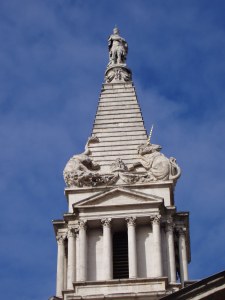 on top of a London church -- I thought all the animals were supposed to live in harmony in Jesus' world?

animatronic T Rex! everlasting love to Liz for showing me the wonders of the Natural History Museum